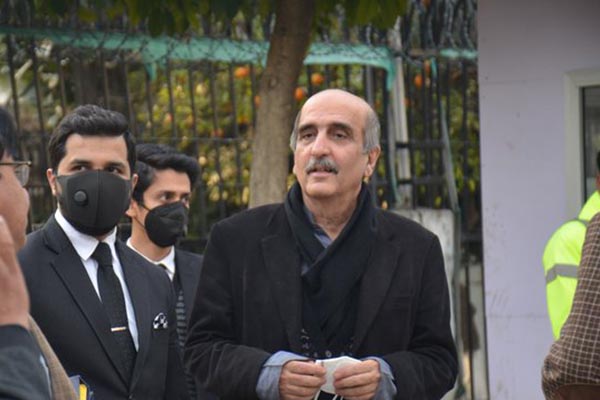 Petitioner lashes out at P.M. Imran Khan after party counsel claims offer of ‘open trial’ does not apply to submitted documents

The Pakistan Tehreek-e-Insaf has a poor record of transparency in the ongoing foreign funding case, petitioner Akbar S. Babar said on Tuesday, after the party’s counsel claimed Prime Minister Imran Khan’s offer of an “open trial” had been “wrongly construed.”

Addressing media outside the Election Commission of Pakistan (ECP) office in Islamabad, PTI founding member Babar alleged that Khan’s claims of offering an end to secrecy in the case was merely intended to mislead the public. Reiterating that the terms of reference of the Scrutiny Committee probing the case called for the inquiry to be conducted in the presence of both parties, he said he was being asked to “rubberstamp a scrutiny process blindfolded.”

Calling the situation “unacceptable,” Babar said the public had a right to know the facts that were being concealed by a party that was “keeping documents secret illegally” despite claiming to be a champion of transparency and accountability.” Referring to Arif Naqvi, the head of the Abraaj Group who was is facing extradition to the U.S. from the U.K., he said that media had reported on the financier being a major funder of the PTI and Khan. Noting this allegation had yet to be denied by the PTI, he lamented that no one appeared investigating it further. He also alleged that he possessed records of the money received by the PTI through unofficial hundi channels, which the prime minister has described as a core means of money laundering.

To a question, he said that he and his lawyers would decide their future course of action after a Feb. 9 scrutiny committee meeting issues its order on whether the records should be kept secret.

The prime minister had offered an “open trial” during a televised speech on Jan. 20. In response, Babar had filed an application before the scrutiny committee on Jan. 26 seeking copies of the PTI’s financial documents, including 23 bank statements that were not provided to the ECP and only became public knowledge on the instructions of the State Bank of Pakistan.

Responding to the application in a written statement addressed to the scrutiny committee, PTI lawyer Shah Khawar refused to allow Babar access to the documents, claiming “the statement of party chairman has been wrongly construed, which is not tantamount to provide documents furnished by the answering respondents [PTI] and material collected by this scrutiny committee.” It said the petitioner’s request should be dismissed.

The foreign funding case has been pending for over six years but has gained prominence in the past few months with the opposition demanding its resolution. The incumbent government, however, claims the real threat is to the opposition, which should now answer concerns about their own alleged foreign funding.