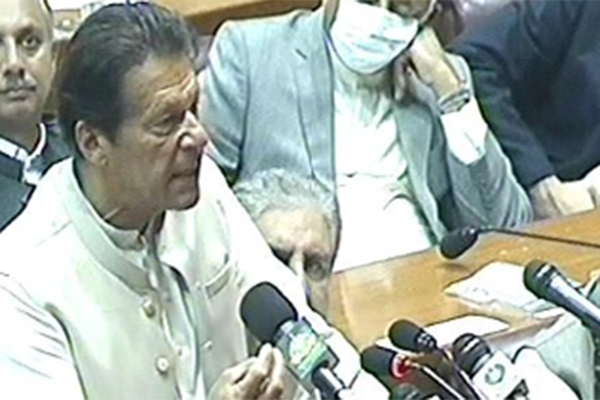 In address to Parliament after securing fresh vote of confidence, Pakistan’s premier vows to bring about electoral reforms, reiterates condemnations of opposition leaders

The incumbent Pakistan Tehreek-e-Insaf-led government is working to steer the country out of its economic hardship, and is fully aware of the inflationary pressures on the public, Prime Minister Imran Khan said on Saturday.

Addressing the National Assembly after securing a fresh vote of confidence in the Lower House of Parliament during a session boycotted by the opposition, he admitted that the biggest pressure on his regime was that of inflation. “This was inevitable due to the rupee being devalued,” he reiterated. “But my team and my government is doing everything it can to control this issue and we will keep working [on it],” he vowed.

Stressing that “no one can stop Pakistan’s progress,” the premier claimed that Pakistan was on the path of economic recovery. “The current account is improving constantly and now even the rupee is strengthening against the dollar without government intervention,” he said, adding that the government was also working to improve the country’s agriculture sector as well as overall exports. “Our biggest problem is of power generation as the contracts signed earlier were at higher rates. I just want to tell the nation that we are thinking of every possible way to lessen the burden on the masses,” he said.

Announcing planned electoral reforms, the prime minister stressed that the government was hoping to bring about a system whose results could not be called into question. “We are doing things; we are fully engaged with overseas Pakistanis so they can cast votes electronically. We are also bringing in electronic machines,” he said, claiming the new system would encourage losers to accept defeat gracefully.

Referring to the Election Commission of Pakistan—which he had criticized for the conduct of the Senate polls—Khan questioned why it believed the elections were not beset by irregularities. “If this is what a good election looks like, what would a bad election look like?” he questioned. “I ask the ECP to take a briefing from intelligence agencies to learn how much money was involved in the Senate elections,” he said, as he reiterated his claims of the 10 years prior to his government coming into power as a “decade of darkness.”

Thanks for the support

The prime minister commenced his speech by thanking lawmakers for supporting him in the vote of confidence. He said he had been heartened to see his party unite as a “team” after it lost the Islamabad Senate seat, adding that people who went through difficult times emerged from them stronger.

Slamming the “embarrassing” way in which elections were held in Pakistan, he reiterated his accusations of leaders of the PPP and PMLN being “thieves” who were trying to blackmail his government to have corruption cases against them set aside. “These people even tried to sabotage FATF [Financial Action Task Force] legislation and had linked passing it to amendments in the NAB law,” he said, adding that if the country had been blacklisted, it would have been in dire straits.

Criticizing Gilani as “one of the most corrupt” politicians in Pakistan, Khan urged the public to support him in his struggle against corruption. “Future generations of this country can only be saved if we remove the menace of corruption from our society,” he said.

Prime Minister Imran Khan secured 178 votes—six more than 172 required—to win a fresh vote of confidence from the National Assembly. The specially convened session was called after the prime minister sought a trust vote to dismiss speculation that he had lost the favor of the majority after his candidate lost the Islamabad general seat to the opposition’s candidate.