PTI-Led Government Will Not Succumb to ‘Pressure’: Imran Khan 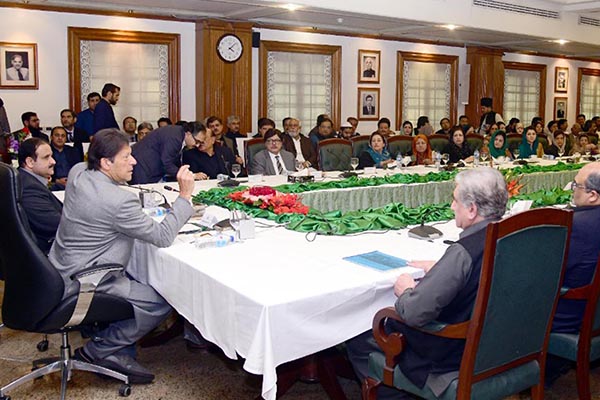 The incumbent Pakistan Tehreek-e-Insaf-led government will not succumb to any pressure from, and will overcome all challenges, including negative propaganda from “a mafia,” Prime Minister Imran Khan said on Sunday.

“We will never succumb to pressure. We have always faced challenges and will continue doing so,” he told a meeting of PTI MNAs from Punjab during a daylong visit to provincial capital Lahore. Khan told the parliamentarians a “mafia” that had been misleading people for decades to fulfill “nefarious designs,” had now started to stir up negative impressions against his government.

“They intentionally try to create chaos just to undermine the positive changes being brought about by the government,” the premier claimed. While Khan did not specify anyone, him and members of his federal cabinet have repeatedly tried to paint opposition forces as members of a “mafia” trying to destabilize his government. He has yet to offer any evidence of these allegations.

Khan said he had summoned this meeting to discuss the problems facing the lawmakers’ respective constituents, difficulties in execution of development projects and their early resolution. He vowed that no part of the country would be discriminated against in terms of development.

The prime minister said the elimination of corruption was a key plank of the PTI’s manifesto and claimed—without much evidence—that “notorious” land mafias and criminals had been taken to task in Punjab for the first time in the province’s history. He said his government had inherited a country with record deficit and huge debt burden, but now the situation was reversing.

Khan told the parliamentarians that the world was looking at Pakistan as an attractive destination for investment, noting representatives of giant firms at Davos had all told him they believed the country offered immense opportunities and potential.

The MNAs apprised the prime minister about the social and development issues confronting people in their areas to which Khan directed the provincial government to devise a mechanism for effective coordination between the administration and the parliamentarians.

Separately, in a meeting with PTI lawmakers in the Punjab Assembly, Khan admitted the previous year had been “difficult,” but claimed the hard times had now been overcome thanks to a stabilized economy. He said the government would now focus on employment opportunities and greater industrialization to avail the “immense bounties” of Pakistan.

The prime minister said he was confident the country would soon advance in terms of development and prosperity due to the economic and social changes being introduced by the PTI government. He claimed the “best administrative team” had been appointed in Punjab, adding a well-coordinated strategy was in the offing to bring about harmony between the administration and elected representatives, and ensure better governance to resolve all public issues on priority basis.

Citing last week’s trip to Davos, where he attended the World Economic Forum summit, Khan said he had saved a record amount for the Treasury by cutting down the money spent on foreign visits. During his trip, Khan admitted the trip had been largely paid for by a private businessman, raising questions about conflict of interest, which neither the PTI nor the P.M. have bothered to respond to.

The prime minister also told the lawmakers that the incumbent government had made great strides internationally, saying in the past year Pakistan had emerged as a “significant and conspicuous country.” He claimed the world was criticizing India’s high-handed actions, while Pakistan was winning applause due to the incumbent leadership’s “transparency and honesty.” He did not appear to discuss a report from Transparency International, released last week, that claimed Pakistan had actually worsened in terms of corruption in 2019. The government has sought to distance itself from the report, slamming it as ‘biased.’