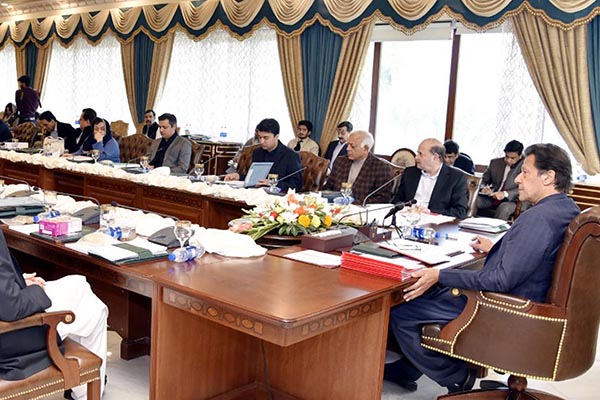 Prime Minister Imran Khan on Tuesday directed the law minister to draft a law muzzling any media coverage of convicts and absconders, Special Assistant to the Prime Minister on Information Firdous Ashiq Awan told journalists at a press conference.

“Convicts and absconders who looted public money are glorified in the media as they frequently come on TV and claim to be innocent and criticize the government and its policies,” Awan said without naming any specific individual. However, it is clear from earlier statements emerging from the Pakistan Tehreek-e-Insaf-led government that the new law would almost certainly target members of the opposition, who Khan routinely slams as “convicts and absconders” in public appearances, attracting their ire. “If they are innocent, why do they avail the media and not come to the country to face their cases,” she added.

During the press conference, Awan said the prime minister wanted a law that would ban all media coverage of convicts and absconders. “The law minister will sit with PEMRA [Pakistan Electronic Media Regulatory Authority] officials to finalize a draft of the law,” she said, without elaborating on how the law would target print media or social media, which the government last week termed an essential tool of governance.

In addition to deliberating on its desire to censor media coverage, the federal cabinet meeting reviewed an application filed by Maryam Nawaz seeking a one-time permission to leave Pakistan and visit her ailing father, former prime minister Nawaz Sharif, in London.

According to Awan, the matter had been referred to a subcommittee led by Law Minister Farogh Naseem. “For the first time in the world’s history a convict wants removal of her name from Exit Control List (ECL) so that she can travel aboard and take care of her ailing father [Nawaz Sharif],” she said in a blatantly false assertion considering the concept of “compassionate release” is enshrined the world over for convicts seeking relief on medical and humanitarian grounds. “Unfortunately, it shows that Nawaz Sharif only trusts his daughter and not his sons, daughters-in-law, grandsons and granddaughters who are already in London,” she added.

To questions on whether these moves would worsen ties between the government and the opposition, making the business of enacting legislation more difficult, Awan deflected and accused the opposition of refusing to cooperate. “On the opposition’s demand we have introduced a bunch of bills in the National Assembly that had been passed through ordinances by the president. Similarly, production orders for detained opposition lawmakers were also issued,” she added.

The federal cabinet meeting also reviewed the performance of the Competition Commission of Pakistan, with P.M. Khan saying steps should be taken to ensure food security and action taken against hoarders and cartels.

The Water and Power Division also updated the cabinet on its functioning, claiming that when the PTI came into power the circular debt had been very high but had finally been brought under control.