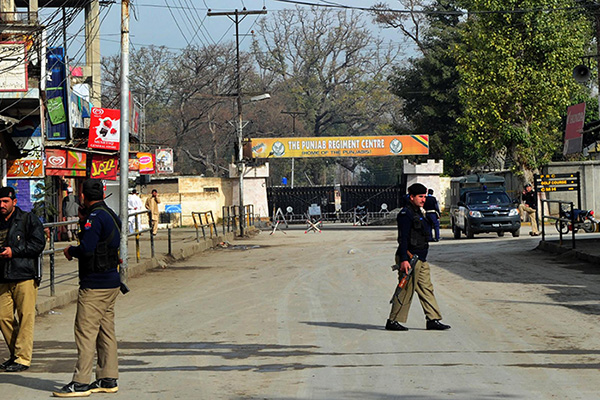 A bomb attack killed 34 people, including a provincial lawmaker, and wounded more than 40 others at a funeral in northwestern Pakistan on Tuesday, police said.

The attack took place in Shergarh town of Kyber-Pakhtunkhwa province’s Mardan district, during funeral prayers for the owner of a local fuel station.

“At least 16 people, including provincial lawmaker Imran Khan Mohmand, were killed and 46 others wounded in the bomb blast,” local police chief Tahir Ayub said after the attack. “It was a suicide attack,” he added.

Updating the casualty count on Wednesday, Ayub said: “The death toll has risen to 34, seven more critically injured have died in hospital.” Another 43 people are still being treated for injuries in hospital.

There has been no claim of responsibility but police say the target was Imran Khan Mohmand, a lawmaker in the Khyber-Pakhtunkhwa assembly. Mohmand was elected as an independent candidate last month. He had since allied with the Pakistan Tehreek-e-Insaf, which has formed a coalition government in the province.

Khyber-Pakhtunkhwa is on the frontline of a seven-year Taliban insurgency and abuts the semiautonomous tribal belt, where U.S. drone strikes target Taliban and Al Qaeda operatives. Washington considers the tribal areas a major hub of Taliban and Al Qaeda militants plotting attacks on the West and Afghanistan.

The blast highlights the security challenges facing the new government of Prime Minister Nawaz Sharif, sworn in earlier this month after winning the May 11 general elections. The attack comes three days after 25 people died when militants blew up a bus carrying female students in Quetta and stormed a hospital where survivors were taken for treatment.

Malala Yousafzai, the Pakistani schoolgirl shot by the Taliban for promoting girls’ education, denounced the attack on the Quetta bus as “cowardly.” Former British prime minister Gordon Brown, the U.N. special envoy for global education, said it was the “bloodiest atrocity yet in escalating violence against female students.”