PTI Shuts Down Parts of Karachi 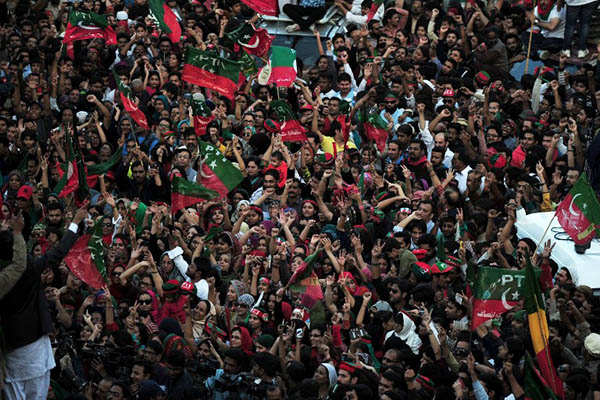 The latest round of protests led by cricketer-turned-politician Imran Khan against the government of Pakistan on Friday disrupted life in parts of Karachi, the country’s largest city and economic heart.

Major shopping areas were closed and there was no public transport available as Khan arrived in Karachi to address his party workers, who were holding sit-ins in several locations, according to an AFP correspondent. Khan has vowed to paralyze major cities around the country as part of his efforts to topple the government of Prime Minister Nawaz Sharif, who he accuses of poll rigging.

An opposition party worker was shot dead in Faisalabad on Monday as hundreds of protesters clashed with riot police armed with water cannon and batons during a rally by Khan’s Pakistan Tehreek-e-Insaf (PTI) party. “We decided not to bring public transport to roads after a senior PTI member threatened his party would not allow any public transport to come to roads,” the city’s transport union president Irshad Bokhari said. He said protesters had blocked roads in the city with burning tyres.

But it was business as usual in certain areas including Azizabad, the stronghold of the Muttahida Qaumi Movement (MQM), the dominant political party in Karachi. Shops remained open and most businesses operated as normal in these neighborhoods.

Though Khan has so far failed in his aims of toppling the government, his party has continued to stage major rallies around the country. He has warned that he and his supporters will paralyze the country on Dec. 18 if their demands are not met.