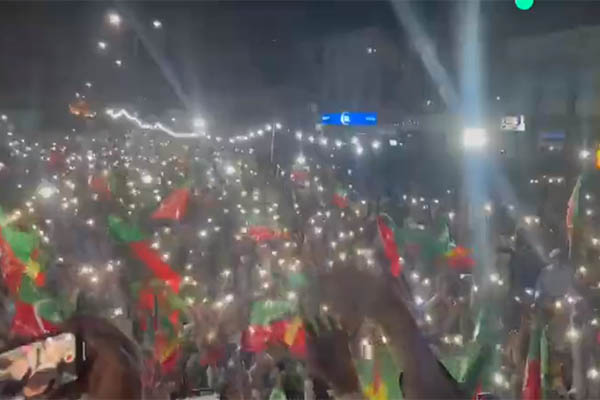 Rallies of thousands taken out nationwide after Isha prayers, with many protesters accusing security establishment of ‘betraying’ Khan

The Pakistan Tehreek-e-Insaf (PTI) took out rallies across the country on Sunday to protest the ouster of party chairman Imran Khan through a successful vote of no-confidence the previous night.

On Friday, in a nationally televised address, Khan had urged his supporters to take to the streets on Sunday night to voice their condemnation of what he has described as a “foreign conspiracy” against his regime. While the PTI has yet to provide any evidence of its allegations, it maintains that a diplomatic cable authored by Pakistan’s former ambassador the U.S. “proves” that Washington was working with the former opposition parties to end his government.

“Pakistan became an independent state in 1947; but the freedom struggle begins again today against a foreign conspiracy of regime change,” Khan posted on Sunday morning. “It is always the people of the country who defend their sovereignty and democracy,” he added. The party’s social media accounts subsequently issued a schedule of the various protests planned nationwide from 9:30 p.m.

In Islamabad, the rally was led by former information minister Chaudhry Fawad Hussain, who thanked PTI supporters from coming out in large numbers to support the ousted Khan. The federal capital’s rally commenced from Zero Point and included PTI supporters waving party flags and chanting slogans in the former prime minister’s favor. Many protesters appeared to have directed their ire toward the country’s security establishment, with slogans and posters both accusing incumbent Chief of Army Staff Gen. Qamar Javed Bajwa of facilitating Khan’s ouster.

In Rawalpindi, Islamabad’s twin city and the location of General Headquarters, Awami Muslim League chief Sheikh Rashid—who is among the few allies of the PTI to remain with the party—addressed a rally outside his Lal Haveli residence and aimed his condemnations at the PMLN, especially the former opposition’s candidate for prime minister, Shahbaz Sharif. However, at one point, he urged the crowd against shouting slogans against the military, as it was “not in accordance with Lal Haveli’s discipline.”

In Khyber-Pakhtunkhwa capital Peshawar, thousands reached the Peshawar Press Club and expressed solidarity with the ousted prime minister. Chanting slogans against Pakistan Democratic Movement chief Maulana Fazlur Rehman, who heads his own faction of the Jamiat Ulema-e-Islam, as well as other political opponents of the PTI, they also didn’t shy from accusing the military of its alleged role in the no-confidence vote. There were reportedly smaller gatherings in other areas of Khyber-Pakhtunkhwa, including Bajaur, Swat, Abbottabad and Lower Dir.

The protest in Lower Dir turned violent, with some PTI supporters attacking the muezzin of a local mosque, raising fears of retaliatory attacks from the JUIF.

Lahore’s rally was led by PTI leaders of the Punjab capital, including former provincial health minister Dr. Yasmin Rashid; former energy minister Hammad Azhar; and Senator Ejaz Chaudhry. The crowds gathered at Liberty Chowk, attracting thousands, with most of the sloganeering focusing on the alleged role of the incumbent military chief. The Lahore rally also had many participants slamming the U.S., focusing on the diplomatic cable that allegedly “proves” the “foreign conspiracy” that ousted Khan.

In Karachi, thousands, including women and children, gathered at Rashid Minhas Road, with Leader of the Opposition in Sindh Assembly Haleem Adil Sheikh leading them. The protesters, as in other cities of the country, chanted slogans against the “imported government” as well as PPP Chairman Asif Ali Zardari and the military.

There were also scattered protests in foreign countries against Khan’s ouster, with videos of PTI supporters gathering in London’s Hyde Park and in Dubai going viral on social media. Reports also emerged of a clash between PTI and PMLN supporters outside Avenfield House in London, where PMLN leader Nawaz Sharif currently resides.

“Thank you to all Pakistanis for their amazing outpouring of support and emotions to protest against U.S.-backed regime change abetted by local Mir Jafars to bring into power a coterie of pliable crooks all out on bail,” Khan posted on Twitter after the rallies. “Shows Pakistanis at home and abroad have emphatically rejected this,” he added.

The former prime minister has announced that he would launch a public campaign from Tuesday that would include protests in various cities across the country. The first rally is slated to be held in Peshawar, with subsequent rallies to reach Rawalpindi, Lahore and Karachi.