PTI to Defend Musharraf in Appeals Against Treason Verdict 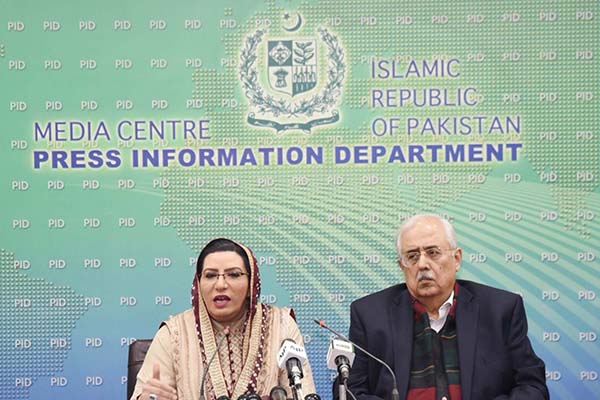 The Pakistan Tehreek-e-Insaf-led government on Tuesday came out in support of former Army chief Pervez Musharraf, saying it would defend the self-exiled military dictator during any appeals filed on his behalf.

Addressing a press conference on a special court announcing the death penalty for Musharraf for high treason over his abrogation of the Constitution in 2007, Special Assistant to Prime Minister on Information Firdous Ashiq Awan and Attorney General of Pakistan Anwar Mansoor Khan claimed the treason trial had been conducted “unfairly” and without recording the statement of Musharraf.

“Musharraf was not given a chance to record his statement under Article 342 [of the Constitution], to present his testimony and witnesses and his request to record his statement through video link or before a commission was turned down by the judge,” he said, ignoring that the former Army chief had been declared an absconder, a designation that allows for the trial and sentencing of an accused in absentia. “There is no question that a person who had committed treason must be punished but in this case the right of fair trial guaranteed under the Constitution was not ensured. A trial should not just be fair but also seen to be fair,” he added. Ironically, the government is claiming Musharraf was denied rights under the very Constitution that he has been found guilty of holding in abeyance.

Khan said that Article 10 (A) of the Constitution granted fair trial as a right of every citizen of the state. “I will defend the law in the case but not any individual,” he said, adding the verdict also raised questions about “urgency in pronouncing the judgment when Musharraf was in critical condition in ICU” in Dubai. This, once again, ignores that Musharraf has been in self-exile since 2016—a period of three years during which he was granted several chances to return and appear before court.

According to the attorney general, one of the major flaws in the case was that those who might have assisted Musharraf in enforcing emergency “had not been made party” to it. Legal experts have said this is not a flaw; the government has the right and authority to file fresh charges against any co-accused, allowing for them to also be tried for the same crimes. The special court on Tuesday even urged the government to file fresh petitions if it wanted to seek trial for any co-accused. This particular case was solely against Musharraf.

The attorney general claimed that if Musharraf had been allowed to record his statement and present witnesses, he might have provided “logical” reasons in support of the emergency he proclaimed in 2007. Reeking of the much-maligned “doctrine of necessity,” Khan’s statement also seems to fly in the face of his own prime minister’s earlier statements. P.M. Khan, prior to coming into power, had repeatedly slammed the abrogation of the Constitution.

Khan also alleged that the complaint against Musharraf was filed by a former interior secretary, when the 18th Amendment directed that only a prime minister and members of his cabinet could authorize any person for filing such complaints.

Asked if had committed contempt of court by declaring the trial “unfair,” the attorney general said: “Once the verdict is announced it becomes a public document and everyone can comment on it.”

De facto information minister Awan, however, seemed to differ on this point, criticizing the opposition for commenting on the court’s decision and “maligning the Army” and “harming the interest of the state.” She said harmony among institutions was necessary at the current juncture to boost the morale of soldiers. She said the Pakistan Army had rendered unmatched sacrifices for regional peace and stability. She claimed some people celebrating the special court’s verdict were hoping for a clash between institutions. “The same people who can be seen rejoicing on TV screens today were the same ones who had taken oath from Musharraf in 2008,” she said.

Awan also appreciated the Pakistan Army for supporting the civilian government. “For the first time, the armed forces have supported a civil government,” she added.