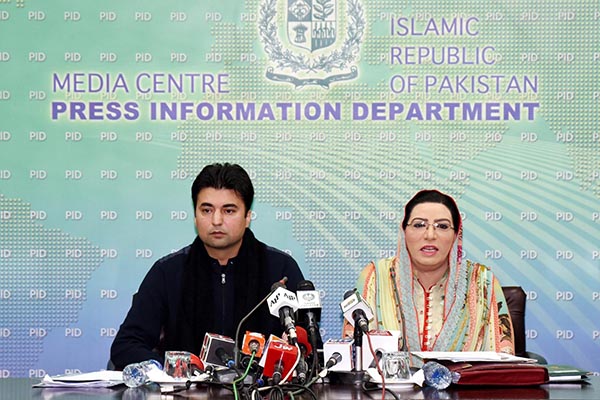 The federal cabinet on Tuesday decided to recover billions of rupees spent by the Pakistan Muslim League (Nawaz) and the Pakistan Peoples Party while they were in power, with communications minister Murad Saeed warning that failure to do so within a month would force the government to pursue legal action.

Addressing a press conference in Islamabad with Special Assistant to the P.M. on Information Firdous Ashiq Awan, the federal minister claimed leaders of the PPP and PMLN had “illegally” misused public money. He claimed PPP’s Yousaf Raza Gilani, who was prime minister from 2008 to 2012, had set up five camp offices in Multan and Lahore using money from the national exchequer despite having personal residences in the cities.

The communications minister took special aim at Shahbaz Sharif, saying he had declared the Sharifs’ Jati Umra residence in Raiwind a camp office despite Nawaz having been disqualified by the Supreme Court in the Panama Papers case at the time.

Saeed also hit out at the security required for the former rulers, despite the country going through a harrowing time during the past decade, with the security situation requiring extensive details to be deployed for their protection, as mandated by law enforcement personnel.

The minister claimed Zardari during his term as president was availing 790 to 1,722 police personnel for his personal, costing around Rs. 163.7137 billion to the national kitty. “Nawaz Sharif spent about Rs. 270 million on the fencing of his private residence of Jati Umra and a contingent of 2,753 policemen was deputed on its security,” he added.

Additionally, said Saeed, police squads were also deployed for the security of the children of the leaders—again required due to persistent security threats. He said Nawaz Sharif’s trip to London for a medical check-up had cost Rs. 340 million—this, too, is mandated by law, which allows rulers to avail medical facilities on taxpayers’ expense. Neither Saeed nor Awan made any mention of seeking to change the law to prevent such uses in future. However, they said the laws governing camp office be changed to prevent their setup.

The communications minister, during the press conference, said Shahbaz Sharif had used the official prime minister’s plane 556 times, and alleged that he had spent Rs. 8.7259 billion on personal shopping during foreign sojourns. Similarly, he claimed Zardari had cost Rs. 3.16 billion to the national exchequer for his personal shopping trips.

According to Saeed, Nawaz made 25 private visits to London as P.M., costing Rs. 1.835 billion, while Zardari as president made 69 private tours to different destinations abroad, costing Rs. 1.421 billion. He also claimed Shahbaz had bought a new helicopter for the Punjab province, costing Rs. 1.3 billion, shortly after assuming charge as chief minister.

Saeed said P.M. Khan lived in his private residence at Bani Gala despite being the prime minister—though he still uses the Prime Minister’s Office for official use and has yet to make any progress on turning it into a “university,” as he had promised in his inaugural speech as P.M. Saeed claimed Khan had spent his own money on the construction of the road leading to his home, which might explain why Khan struggles to pay his daily expenses on his P.M.’s salary, as he claimed just last week.

Saeed also aid that Khan shunned using chartered planes for foreign visits and preferred commercial flights—though this is not without controversy. Khan admitted in Davos that a private businessman paid for his trip, raising questions about conflict of interest.

The minister claimed that the excess spending of the former rulers had forced the country to take out hefty loans, raising the overall debt. He claimed Rs. 24,000 billion were taken in loans during the tenures of the PPP and PMLN.