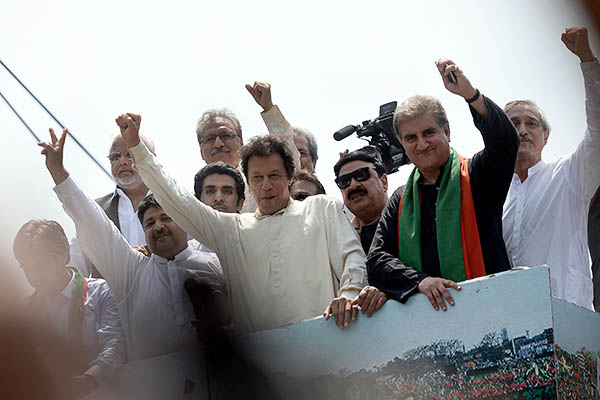 Protesters are demanding the government step down and be replaced by an interim, technocratic setup.

Thousands of protesters gathered in Lahore on Thursday, preparing to march on the capital to unseat the government they claim was elected by fraud.

Supporters of cricketer-turned-politician Imran Khan and populist preacher Tahir-ul-Qadri massed separately ahead of the planned rally in Islamabad. Both Khan and Qadri say the last general elections were rigged, and want Prime Minister Nawaz Sharif to resign and hold new polls. Sharif won by a landslide in May 2013 and his Pakistan Muslim League (Nawaz) is in power in the federal and Punjab governments.

The authorities have indicated they will allow Khan, whose Pakistan Tehreek-e-Insaaf (PTI) political party came third in the polls, to go ahead with his march. The Punjab government had claimed it would not allow Qadri to proceed, but relented in the afternoon and permitted his Pakistan Awami Tehreek political party to join Khan.

Security in Islamabad and on its approach roads has been ramped up in recent days. More than 20,000 police and security forces have been deployed and almost all roads into the city have been blocked with barbed wire and shipping containers.

Qadri followers clashed with police last week when they tried to remove blockades around the cleric’s residence, leaving at least two people dead, and there were fears of more violence on Thursday. An AFP journalist saw PAT supporters equipping themselves with clubs, masks and helmets in preparation for the march. Qadri pledged to a press conference that his workers would not indulge in any unrest and would protest peacefully.

There was a festive mood in Lahore’s Zaman Park where thousands of PTI supporters gathered, waving green and red party flags, dancing and singing patriotic songs. Khan urged his followers on, galvanizing them into action.

“If you succeed, then there will be justice in Pakistan and people all around the world will respect the green passport,” Khan told the cheering crowd. Khan, a cricket hero who led Pakistan to World Cup glory in 1992, has persistently cried foul over last year’s elections and tried numerous avenues to have the results of a number of seats thrown out.

But international observers who monitored the polls said they were free and credible and critics say PTI should not have accepted their seats in Parliament if they did not believe the vote was fair. The “long march” planned for Thursday, the anniversary of Pakistan’s independence from Britain, will in fact be a motorized cavalcade, and is unlikely to reach Islamabad before the evening, at the earliest.

Some have accused PTI and PAT of being aided by the military establishment to undermine the government, diverting attention from more pressing issues like an offensive against the Taliban in the northwest and the country’s economy. On Monday Qadri told AFP he wanted an “interim national government” consisting of technocrats and experts.

Political analyst and author Imtiaz Gul said the protests were one of the biggest challenges Sharif has faced since being elected for a third stint in office last year. In a country that has seen three coups in its 67-year history, the threat of Army intervention always hovers in the background at times of unrest. But while Gul said there was a “real danger of bloodshed and violence,” he added a coup was unlikely, though the coming days could leave the civilian government weakened.

“Based on the past experiences and in view of the current national and international environment, the Army will not possibly intervene,” he said. “However, it may still use its political clout to nudge the politicians away from confrontation.”

The military is rumored to be unhappy with the way the Sharif government has pursued criminal charges, particularly a treason case, against former Army chief Pervez Musharraf. A four-day sit-in protest Qadri led in Islamabad in January last year, aimed at bringing down the last government and getting a caretaker administration to enact reforms, had sparked similar fears of a plot to derail the general elections.

Pakistani national has great potential, but its leadership in the past and present, hell-bent to amass wealth by hook and crook transfer it to foreign countries. This nation needs nothing special to become economically an Asian Tiger but a true and honest leadership at the top, like Mathir Muhammad in Malaysia. Imran Khan has courage and ability to steer this nation to the destination of development and prosperity.

On the other hand, Mian and family (as N league is considered a party of Sharif family) could not provide an iota of relief to the nation hard hit by load-shedding price hike of electricity, petroleum and petroleum products, shortage of gas at CNGs, and burgeoning prices of daily use commodities. The tall claims of PML (N) ended in smoke and public is ill at ease. The nation long suffering from pains and pangs of misrule and corruption indispensably needs a pain-killer, which PML N dismally failed to provide.

Handling of Inqblab and Azadi march by the PML N government at Punjab and Centre is an example of chaotic and confused management.

Qadri’s Inqlab march may has attracted opposition from some quarters, but his depiction of public problems confounded by poll rigging, corruption and rule of some clans, through sham democracy is utterly true, revamping of present system is need of the hour.

This was inevitable to say the least, imran khan see this the sole opportunity to become the prime minister.. I literally do not understand the need for such marches when the government is just been elected an year ago only, the political and economic ramification of this march has caused the country a loss of 300 billion rupees till now and continues to grow. This march as always happened in the history of Pakistan will serve few and others will be inundated with nothing but false hopes……