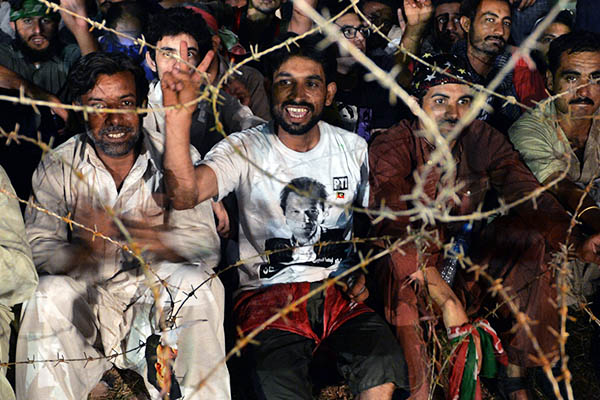 Analysts say Nawaz Sharif will have to listen to the Army if he wishes to remain in power.

Ministers and opposition politicians met anti-government protesters on Wednesday, but talks ended for the day with the sides appearing no closer to resolving a weeklong political crisis that has rattled the nation.

Thousands of followers of cricketer-turned-politician Imran Khan and populist cleric Tahir-ul-Qadri have been demonstrating outside Parliament House in Islamabad, trying to force Prime Minister Nawaz Sharif from office.

Khan and Qadri claim last year’s general elections that swept Sharif to power by a landslide were rigged and are demanding his resignation. Late Wednesday Khan’s team met with government negotiators in Islamabad to discuss his Pakistan Tehreek-e-Insaf (PTI) party’s demands.

“We put our demands before the government team and they promised to get back to us on Thursday after examining them,” PTI vice-chairman Shah Mehmood Qureshi told reporters after talks. Khan had earlier struck a defiant note, insisting Sharif must resign before he would participate in negotiations.

Chaudhry Muhammad Sarwar, a member of the government team and governor of Punjab province said the talks were cordial. “Whatever decision the two committees take will be in the best interest of Pakistan,” he said.

Earlier Wednesday evening, a cross-party delegation met members of Qadri’s team to try to resolve the standoff, but the session finished with no concrete result. Talks were dominated by the issue of the alleged murder by police of at least 10 of Qadri’s Pakistan Awami Tehreek (PAT) workers in Lahore in June, Rahiq Abbasi, a member of the cleric’s committee, told reporters afterwards.

“We called for the immediate registration of a case and the arrest of all accused,” Abbasi said, reiterating his call for Prime Minister Sharif’s government to stand down. The government’s response was not immediately known.

The showdown has added to instability in a country that has had three military coups since its creation in 1947 and which is currently struggling with a homegrown Taliban insurgency, a crippling power crisis, and a sluggish economy. The two protest movements are not formally allied and have different goals, beyond toppling the government. But their combined pressure—and numbers—have given extra heft to the rallies.

If PAT were to reach a settlement with the government and withdraw, PTI’s position would be significantly weakened, despite Khan’s tough stance. The party has been unable to attract the kind of following Khan had promised prior to the protest and official estimates claim the PAT protesters outnumber the PTI almost three to one.

Neither movement has mobilized mass support beyond their core followers and opposition parties have shunned Khan’s call to unseat the government and begin a campaign of civil disobedience. The Supreme Court, which has played an influential role in Pakistani politics in recent years, ordered Khan and Qadri to appear on Thursday to explain their protests. The ruling came after petitions urging the court to restrain Khan and Qadri from “making illegal and unconstitutional demands,” said Kamran Murtaza, a senior lawyer.

The protests have so far been peaceful but the crisis has raised fears that Pakistan’s fragile democracy could be under threat of another military intervention. Rumors have abounded that elements within the influential military have been behind Khan and Qadri’s moves, though the cleric and the interior minister have adamantly denied this.

The Army’s chief spokesman Maj. Gen. Asim Bajwa said via Twitter the situation required “patience, wisdom and sagacity” from all sides and could only be resolved through “meaningful dialogue.”

Sharif has a history of testy relations with the military—his second term as prime minister ended abruptly in 1999 when then-Army chief Pervez Musharraf seized power in a coup. His government is thought to have angered the military further by pursuing criminal cases against Musharraf dating back to his 1999-2008 rule, including treason charges.

Military analyst Ayesha Siddiqui warned that the situation was precarious. “From the military perspective, they have tried and tested Nawaz Sharif a third time and they feel disappointed. Why would they let him be?” she said. But Hamid Gul, the former head of the powerful Inter-Services Intelligence agency, said that despite the military’s differences with Sharif, he thought they were unwilling to get involved. “They [Khan and Qadri] are trying to drag the Army into it, to pull the Army, but the Army is very reluctant,” said Gul, adding that the crisis would inevitably weaken Sharif. “If Nawaz wants to stay in power he has no choice” but to listen to the Army, Gul said.

The United States, Britain and the European Union have all voiced support for Pakistani democracy and urged the feuding sides to negotiate a way out of the impasse. Last year’s elections, rated free and credible by international observers, were an important landmark for Pakistani democracy—the first time one democratically elected government had completed its term and handed over power to another.