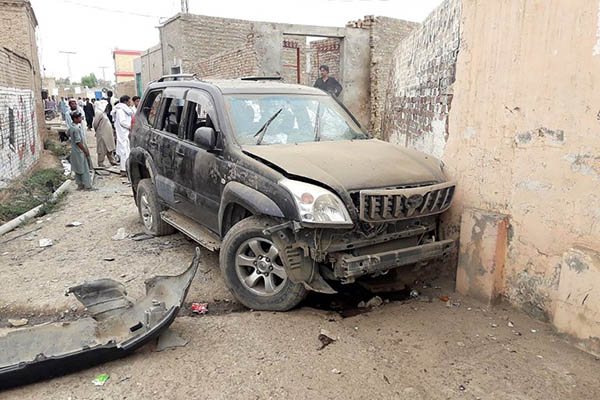 Claimed by the Pakistani Taliban, the latest attack also claimed the life of Ikramullah Gandapur’s driver

An election candidate and his driver were killed by a suicide bomber in Khyber-Pakhtunkhwa province on Sunday, police said, three days before countrywide general elections.

Ikramullah Gandapur, a member of cricketer-turned-politician Imran Khan’s Pakistan Tehreek-e-Insaf party, was contesting polls for the provincial assembly. He “succumbed to his injuries in Combined Military Hospital after a suicide bomber blew himself up near his Land Cruiser (SUV) this morning,” district police chief Zaheer Afridi told AFP.

Faraz Mughul, Gandapur’s assistant, confirmed the casualties. “Our hearts weep for him and his family and we pray for both,” the PTI said in a statement.

The Pakistani Taliban claimed responsibility for the attack in a message sent to the media.

The bombing is the latest in a number of attacks targeting politicians campaigning ahead of the national polls on July 25. A suicide blast in Balochistan province on July 13 killed 149 people—one of Pakistan’s worst-ever terror attacks—underscoring continuing security challenges in the country following years of dramatic improvements.

Violence in Pakistan has dropped significantly in recent years as a result of intensified military operations against militants in the tribal areas bordering Afghanistan. But analysts have long warned that Pakistan is not tackling the root causes of extremism, and that militants retain the ability to carry out spectacular attacks.

The military has warned of threats ahead of the polls, and said it will deploy more than 370,000 soldiers for security on election day.