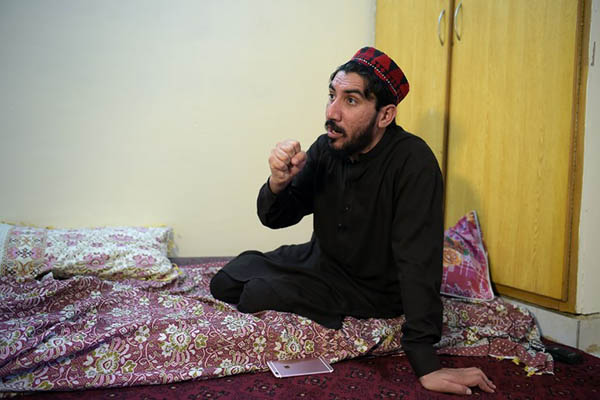 Manzoor Pashteen has been booked on incitement, conspiracy charges

The leader of the Pashtun Tahaffuz Movement (PTM), Manzoor Pashteen, was on Monday arrested in Peshawar, according to officials and members of the PTM.

Police officials in Shaheen Town, where Pashteen was taken into custody, confirmed his arrest and said the rights activist would shortly be shifted to Dera Ismail Khan, where a First Information Report had been registered against him. Pashteen would be presented before a judicial magistrate for transitory remand later in the day, they added.

A copy of the FIR against Pashteen, seen by Newsweek, states that he is wanted under Sections 506 (punishment for criminal intimidation); 153-A (promoting enmity between different groups); 120-B (punishment of criminal conspiracy); 124-A (sedition); and 123-A (condemning the creation of Pakistan and advocating the abolishment of its sovereignty) of the Pakistan Penal Code.

In a posting on Twitter, PTM leader and parliamentarian Mohsin Dawar said Pashteen’s arrest would not diminish the movement’s resolve. “This is our punishment for demanding our rights in a peaceful and democratic manner,” he said of the arrest. “Manzoor’s arrest will only strengthen our resolve. We demand the immediate release of Manzoor Pashteen,” he added.

In a subsequent post, Dawar urged PTM workers and supporters to avoid any unrest over Pashteen’s arrest. “It is my request to PTM workers and supporters to remain calm in response to Manzoor’s arrest,” he said. “We will devise a strategy after consultations. We are up against those who are most troubled by demands for constitutional rights and we will continue doing that,” he added.

Prime Minister Imran Khan, prior to his victory in the 2018 general elections, had vowed to support the PTM’s cause and advance their demands. Since his election, he was noticeably backtracked on those claims, with senior government officials urging the group to avoid any unrest.