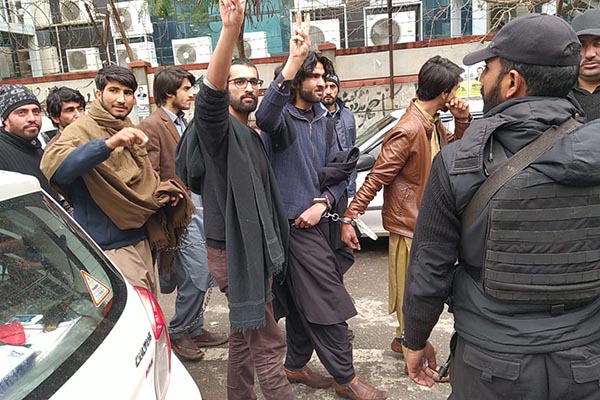 Islamabad police on Tuesday registered a First Information Report against supporters of the Pashtun Tahaffuz Movement who had been protesting for the release of Manzoor Pashteen.

The FIR, filed at Islamabad’s Kohsar Police Station, names 23 individuals, including Ammar Rashid, the Punjab president of the Awami Workers Party. The FIR, which has been seen by Newsweek, charges the protesters under Sections 188 (disobedience to order duly promulgated by public servant), 353 (assault on public servant), 147 (rioting), 149 (being member of unlawful assembly), 505-A (defaming Army), 505-B (public mischief), 124-A (sedition), 341 (punishment for wrongful restraint), 186 (obstructing public servant) of the Pakistan Penal Code.

According to the FIR, the protesters were informed that Section 144 of Pakistan’s Criminal Procedure Code had been imposed in the federal capital, barring any group larger than five people from gathering in public spaces. It alleges that the protesters refused to disperse, chanted slogans against the Pakistan Army and the state, and in favor of Pashteen, and also blocked a road.

On Wednesday, the protesters were presented before a judicial magistrate in Islamabad. They were sent to Adiala Jail till Feb. 12. Mohsin Dawar, a PTM lawmaker who was also arrested but then released before being charged, said in a series of posts on Twitter that the protesters had been exercising their right to a peaceful protest when they were taken into custody.

“The State reminded us once again that our rights don’t mean much as they didn’t bother to create even flimsy grounds for our arrests,” he said, adding that the detained had been sent to different police stations. “I was told by the police that they were setting me free. I told them that I will not go until all the others are set free as well. Then they came back again, telling me that they will set all free so I decided to leave,” he said.

However, Dawar added, he had then learnt some of the protesters remained in jail and vowed to continue protesting for their release. “We will protest till each and everyone is released. I would also like to thank all those who condemned our arrests,” he said.

“As our freedoms are shrinking silence is not an option,” he concluded. “The fight to win back our right to dissent, is a common cause that transcends ethnicities and beliefs. Speak up and be counted, your life means nothing if you don’t have the freedom to disagree.”

PTM leader Manzoor Pashteen was arrested earlier this week on charges of incitement and sedition. He has been shifted to Dera Ismail Khan, where a FIR has been registered against him. His detention provoked protests both within, and outside, Pakistan.

People peaceful protesting for the release of Manzoor Pashteen were detained, man handled and ultimately charged for offences they didn’t commit. In this country there is no freedom of expression, no right to protest or accountability for the actions of those in power. These young, highly educated political workers didn’t do anything unlawful but are deemed trainers and agents of Raw. So unjust and unfair. Shame on the military establishment and the ruling elite.