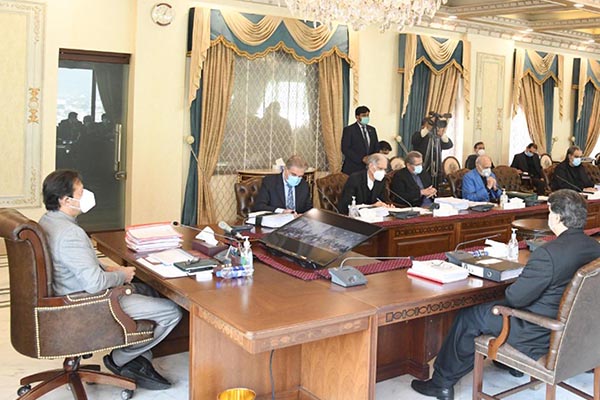 Staging large public gatherings, such as political rallies, while the country is reporting more than 50 deaths due to coronavirus daily is tantamount to playing with lives and a violation of Islamabad High Court orders, Prime Minister Imran Khan said on Tuesday.

Presiding over a meeting of the federal cabinet, he said the country needed to take serious decisions, and show a sincere attitude toward preventative measures amidst the second wave of COVID-19, according to a statement issued by the Prime Minister’s Office. The prime minister stressed that everyone must come together to curb the spread of the pandemic, adding that health officials and hospitals were currently under immense pressure. He also directed the cabinet to ensure the timely procurement and distribution of a coronavirus vaccine.

The cabinet, according to sources, also expressed anger at the Punjab government for its handling of the Pakistan Democratic Movement’s Multan rally. The prime minister directed authorities to take stern action against opposition leaders if they go forward with their Dec. 13 rally in Lahore in violation of coronavirus-related preventive guidelines.

According to the sources, the prime minister said that the opposition should be allowed to continue with their upcoming rally, but should be penalized under law. He also expressed displeasure at the Multan rally’s handling resulting in media coverage for the PDM for three-to-four days unlike the one day they would have gotten if the rally had not faced government resistance.

In a post-meeting press conference, Information Minister Shibli Faraz appeared to confirm this. “The government would not stop people from participating in the political gathering of PDM in Lahore. However, action would be taken against those who instigate the people to violate health guidelines,” he said. “The opposition is acting illegally by holding public meetings; this is why they should be held accountable,” he added.

During the meeting, the cabinet was given a detailed briefing on two major projects initiated by the federal government—the Ravi Riverfront Urban Development Project and Bundle Island. It was informed that the Ravi project had been launched on Aug. 7, and had a master plan envisaging the construction of 3 barrages and 7 wastewater treatment plants to meet the water requirements of Lahore. The project would be completed in partnership with the private sector, ensuring the government does not need to provide any excess funding.

The Ravi project is expected to cost billions of dollars, and would include the plantation of 10 million trees to reduce corruption, the cabinet was told.

On the Bundle Island project, the cabinet was told it had been designed as per international standards. According to the Prime Minister’s Office’s statement, the 12,000-acre project is expected to generate about $50 billion in direct foreign investment, and a Memorandum of Understanding for $1.3 billion in foreign investment has already been signed for it.

The prime minister reiterated his belief that both projects were essential for controlling environmental pollution, earning foreign exchange and generating employment. He claimed the Bundle Island project would help protect mangroves and control water pollution, adding that overseas Pakistanis were keenly interested in investing in these projects.

The cabinet, per the Prime Minister’s Office, also ratified decisions taken at the Nov. 26 meeting of the Committee on Legislation. The prime minister said the law should have no leniency for perpetrators of heinous crimes like rape. He emphasized the need to focus on preventing the abuse of women and children, adding it was important for all parties to work together to prevent such crimes.

The cabinet also authorized the Aviation Division to renew the public transport license of Air Sial, and allowed the Ministry of Defense to sign a protocol of cooperation between the Pakistan Navy Engineering College and Yildiz Technical University Turkey.

The cabinet constituted a six-member committee to ensure the handover of the Islamabad Metropolitan Club to Federal Education Ministry for the establishment of the Islamabad Campus of the National College of Arts. Reviewing the state of government-owned properties, Khan sought recommendations in the next cabinet meeting on how best to utilize a Rs. 2 billion building in F9 Park. The cabinet constituted another committee to formulate suggestions and recommendations on effective use of properties in Pakistan-administered Kashmir. The prime minister said proposals for all these properties should ensure they provide maximum benefit to the people.

The federal cabinet also approved an extension to the tenure of the executive director of the National Institute of Health, and the appointment of Mohammad Naeem Akhtar as the chief executive officer of Postal Life Insurance Company.

The cabinet also cancelled the services of incumbent Export Processing Zones Authority chairman Shafiqur Rehman Ranjha, and approved the appointment of experts to the Board of Governors under the Federal Medical Teaching Institute Ordinance 2020.