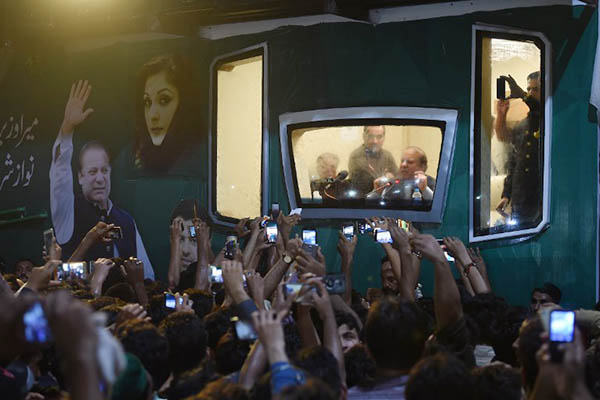 As deposed ex-premier Nawaz Sharif makes his way from Islamabad to his home in Lahore amid “mammoth” Pakistan Muslim League (Nawaz) crowds, commentators are eagerly reading anti-Army signals in his speeches. The Pakistan Institute of Legislative Development and Transparency (PILDAT), in its report on civil-military relations for the month of July, says it bluntly: all is not well between Sharif and the Army.

Sharif’s assertion that his case at the Supreme Court “was already decided” is taken to mean that the GHQ was behind the entire judicial process that led to his dismissal; Army chief General Qamar Javed Bajwa’s statement that he would “uphold the rule of law and supremacy of the Constitution” means the Army is determined to see Sharif out of politics. The TV channels have already taken sides, with some of them highlighting Sharif’s “vilification” of the Army as an act of treason. PILDAT President Ahmed Bilal Mehboob predicts: “I believe that civil-military relations would go from bad to worse and may create a crisis-like situation in the coming days.” And he traces it to “a big difference in civil-military points of view over relations with India and Afghanistan.”

When TV anchors ask why a party in power should stage a protest march the answer is in the subtext: it is actually not in power; someone else is calling the shots. The above reading goes back all the way to the “Dawn leaks” in October last year in which the message given to the Army was that foreign policy as run by the GHQ was isolating Pakistan in the region and in the world. It also carries an echo of the 2014 Pakistan Tehreek-e-Insaf (PTI) sit-in “dharna” when then-PTI leader Javed Hashmi broke ranks to announce that the entire show had been planned and executed by the Army and its Inter-Services Intelligence (ISI). He repeated his charge last month too, saying the Panama Papers case was a pretext to oust Sharif from power. Unfortunately, this too is the way the current situation is being seen across the world media; but back in Pakistan almost all the main political parties are opposed to the party in trouble and would like to see its dominance come to an end in the coming days.