Punjab Goes On Alert against the Islamic State 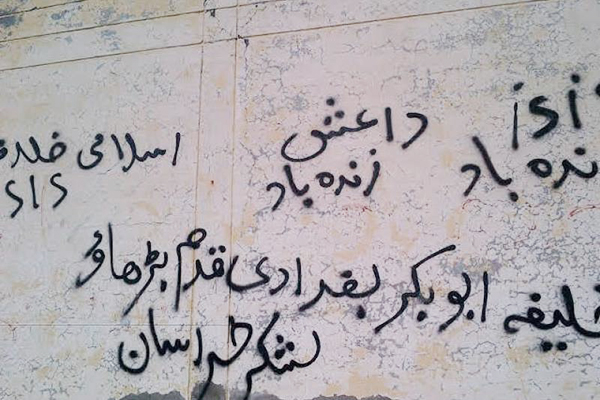 Police insist the Islamic State has no presence in the province.

On Nov. 10, police discovered and removed posters and graffiti in support of the Islamic State from Lahore, capital of Punjab province and Prime Minister Nawaz Sharif’s hometown. About a dozen pro-I.S. posters, with the organization’s stark flag emblazoned on them, were scraped off electricity poles running along the city’s canal, according to police, who also oversaw the scrubbing of “Daish Zindabad” graffiti from walls in the Nawab Town neighborhood.

“I am 100 percent sure this was the doing of Lashkar-e-Jhangvi,” Ijaz Shafi Dogar, superintendant of police, told Newsweek about the Sunni militant group. “The areas where this material appeared have a large Shia population. Lashkar-e-Jhangvi wants to scare them and prevent them from carrying out their religious practices in the holy month of Muharram.”

Hate-speech charges have been registered against “unknown persons,” according to police. The Punjab government has also instituted special investigating units, each comprising four plainclothesmen, at every police station in the province to patrol the streets and tear down any hate material that could incite a sectarian clash between the Sunni and Shia populations.

Posters in support of the group formerly known as ISIS or ISIL, and commonly referred to as Daish in Pakistan, first appeared in Lahore in October. Graffiti favoring I.S. has appeared in Karachi and its propaganda literature in Peshawar.

I.S., which has overtaken Al Qaeda as the primary global jihadist outfit, considers the Shia heretics. Dogar insists I.S. has no presence in the Punjab. “There is no Daish here,” he says, “Lashkar-e-Jhangvi is desperate to revive itself in the province; so it is pretending to have ties with an international group.”

“It has been reliably learnt that Daish has offered some elements of Lashkar-e-Jhangvi and Ahl-e-Sunnat Wal Jamaat to join hands in Pakistan. Daish has also formed a 10-member ‘strategic planning wing.’ They are now planning to inflict casualties [on] Pakistan Army outfits who are taking part in Operation Zarb-e-Azb. Moreover, Daish claims to have gathered 10,000 to 12,000 followers from Hangu and Kurram Agency. They intend to carry out multifaceted attacks on [law-enforcement agencies] and [seize] important government installation[s] in Khyber-Pakhtunkhwa. Daish desires to assign Lashkar-e-Jhangvi for offensives against Ahl-e-Tashi [the Shia] in Pakistan [after which] sectarian outrage will be increased in Pakistan.”

The report recommends that law-enforcement agencies be “sensitized” to the looming threat, undertake “strict monitoring” of Jhangvi “elements,” and maintain “extreme vigilance” and “heightened security,” especially in Khyber-Pakhtunkhwa and the federally administered tribal areas, in order to preempt terrorist attacks.

Despite this, the Pakistani government insists there’s no I.S. crisis. Speaking in Karachi on Nov. 11, Chaudhry Nisar Ali Khan, the interior minister, said I.S. is not present in the country: “No organization of this name exists in Pakistan.” The writing on the wall tells a different story.