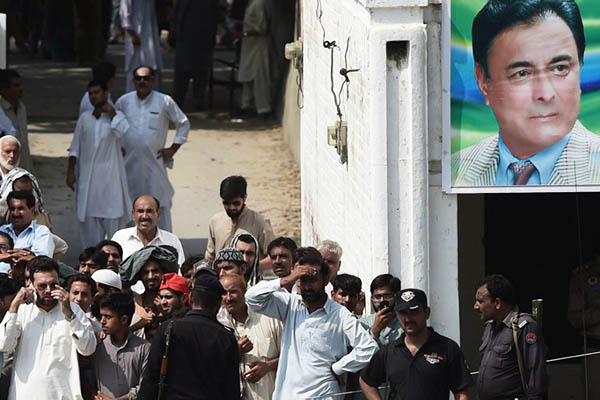 Another 19 people also killed in attack targeting meeting between politician and locals.

Two suicide attackers on Sunday killed a provincial minister, who had campaigned against militants, and at least 19 other people, after detonating a bomb at a meeting the minister was attending.

Khanzada, 71, had been holding a meeting with local people who had come to express their condolences on the death of his cousin. He was trapped with several others under the rubble after the blast brought down the roof of the building in the village of Shadi Khan in Attock district.

“There were two suicide bombers, one stood outside the boundary wall and the second one went inside and stood in front of the minister,” Mushtaq Sukhera, provincial police chief, told reporters. “The blast by the bomber standing outside ripped the wall which caused the roof to fall flat on the minister and people gathered there,” he said.

Sukhera added police were investigating whether the attacker inside the building detonated a bomb.

A police spokeswoman said that that 16 people including the minister and two policemen were killed and 22 others were wounded in the attack.

Ihsanullah Ihsan, spokesman for the hardline Jamaat-ul-Ahrar faction of the Tehreek-e-Taliban Pakistan (TTP) claimed responsibility for the attack on Twitter, saying it was revenge for the killing of a sectarian militant commander and others.

Last month the leader of an anti-Shia group behind some of Pakistan’s worst sectarian atrocities was killed in a shootout with police, along with 13 other militants. Malik Ishaq was shot dead along with fellow Lashkar-e-Jhangvi (LeJ) militants, including senior commanders, in Punjab.

“The Attock attack is revenge for the martyrdom of Malik Ishaq shaheed [martyr] and other mujahideen brothers,” Ihsan said.

Khanzada, a retired army colonel, had been a member of the Punjab Assembly since 2002 and an active member of the Pakistan Muslim League (Nawaz), the party of Prime Minister Nawaz Sharif. The prime minister, along with President Mamnoon Hussain and Army chief General Raheel Sharif condemned the attack and expressed their resolve to fight terrorism.

“Such dastardly coward attempts can’t dent our national resolve to eliminate the menace,” said Army spokesman Major General Asim Bajwa in a statement. “Khanzada Shaheed was a bold officer whose sacrifice for the greater cause of cleansing Pakistan won’t go to waste.”

Officials said there were up to 40 people in the compound when the suicide attack took place. The attack caused the entire roof slab to fall in one piece, complicating rescue efforts. A specially trained team of army rescuers with modern equipment was working with civilian rescuers to lift and cut sections of the fallen roof to reach the victims.

In the past year Pakistani authorities have cracked down hard on the myriad insurgent groups that have plagued the country for a decade. The offensive intensified after Taliban gunmen slaughtered more than 130 children at a school in Peshawar in December.