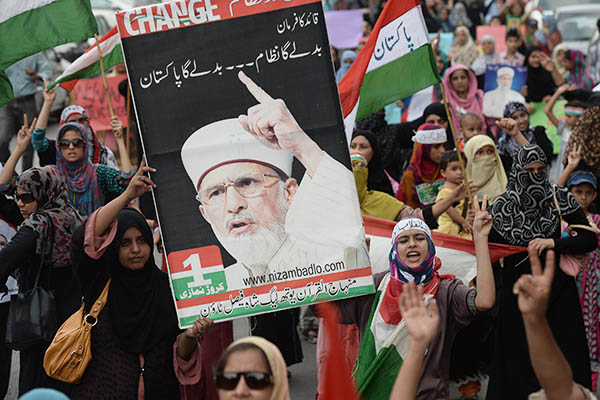 Supporters of Tahir-ul-Qadri protest the police brutality that led to the killing of eight people. Asif Hassan—AFP

Case registered against 54 named and 3,000 unknown people under charges of terrorism, murder, riots and attack on police.

Punjab police said on Thursday they had filed terrorism charges against followers of prominent preacher and anti-government critic Tahir-ul-Qadri, including his son, following clashes with the group in Lahore.

Eight people were killed when riot police armed with assault rifles clashed with supporters of Qadri, who lives in Canada but is due to come to Pakistan next week.

“There is one case against 54 [named individuals] including Tahir-ul-Qadri’s son Hassan Mohiuddin and 3,000 unknown people under the charges of terrorism, murder, riots and attack on police,” said senior police official Zulfiqar Cheema.

Police said the clashes began when they went to remove what they called illegal security barricades from the offices of Qadri’s Pakistan Awami Tehreek (PAT) in the Model Town neighborhood on Monday night.

The violence came as Pakistan’s military is engaged in a major offensive against Taliban militants in the restive northwest, and could put political pressure on Prime Minister Nawaz Sharif’s government at a delicate moment.

The religiously moderate cleric has a large following in Pakistan. But some analysts believe he is also supported by the country’s military establishment to keep civilian authorities in check.

Meanwhile, a judicial commission also started its probe into the incident, calling for witness statements from the general public.