Home Sports ‘Puppets in the Hands of Bookies’

‘Puppets in the Hands of Bookies’ 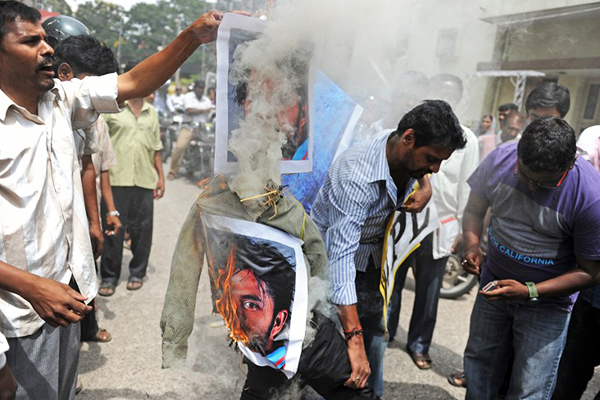 The arrest of three Indian cricketers for spot-fixing has prompted new fears over the growing influence of betting mafias on the game in the subcontinent and despair about the “cancer” of corruption.

Police behind the arrests say the trio was acting under orders from crime syndicates whose bosses are based in the Gulf but are well aware of the rewards if they can manipulate events on the field throughout the cricket-mad region.

Commentators meanwhile say administrators from across South Asia have to share some of the blame for the growing list of scandals after failing to ostracize players who have previously been fingered by investigators.

“The spot-fixing cancer has spread far and wide and there is no cure unless authorities take strict action against players,” said leading cricket historian Boria Majumdar. “Cricketers who are found guilty should have nothing to do with the game for the rest of their lives.”

The three arrested on Thursday, including Test bowler Shanthakumaran Sreesanth, are said to have deliberately bowled badly in exchange for tens of thousands of dollars while playing for the Rajasthan Royals in the Indian Premier League.

It is the second such scandal to have rocked the tournament in as many years and comes only months after leading umpires from Bangladesh, Pakistan, and Sri Lanka were caught in a TV sting being apparently willing to give favorable decisions in exchange for cash during other Twenty20 competitions in the region.

And the biggest cricket corruption scandal of recent years ended up with the jailing of three Pakistani players, including former skipper Salman Butt, for spot-fixing during a Test match against England at Lord’s in August 2010.

With the exception of Sri Lanka, betting is illegal in the cricket-playing nations of South Asia but backstreet bookmakers abound, accepting bets for everything from the outcome of matches to the runs scored each over and extras. Investigators say such an array of bets makes the game particularly vulnerable to manipulation.

“It is a fact that illegal syndicates of bookies and punters are thriving across the subcontinent,” one of the investigators behind Thursday’s arrests said on condition of anonymity. “Cricket has become a vehicle for bookies to make pots of money. We are still trying to trace the exact flow of the cash but our preliminary investigations show the bookies were operating under instructions of a mafia network based in Dubai,” which happens to be the headquarters of the International Cricket Council.

Dave Richardson, ICC chief executive, said after Thursday’s arrests that the sport’s governing body and its members “have collectively taken measures to tighten vigilance … as well as offering strict penalties to those found guilty of illegal conduct.”

But commentators point out that some of the sport’s biggest names remain very much part of the cricketing fraternity, despite being previously caught up in corruption scandals.

A Pakistani judge fined the bowlers Wasim Akram and Mushtaq Ahmed and recommended that neither be allowed to captain their country after a corruption inquiry a decade ago but both men have gone on to mentor teams in the IPL.

Shane Warne, the legendary Australian who accepted cash from bookmakers in return for information about the pitch, captained the Rajasthan Royals to victory in the first edition of the IPL in 2008. Like Akram, Warne is now a regular television pundit.

Meanwhile, the former Indian skipper Mohammad Azharuddin, who received a life ban for alleged match-fixing, was later elected as a lawmaker for the ruling Congress party. The high court struck down his life ban last year.

Sharda Ugra, senior editor at ESPNcricinfo website, said administrators had missed a chance in the past to send out a clear zero-tolerance signal. “It is time the administrators show they mean business. The latest corruption scandal is a test case for the authorities,” she said.

The litany of scandal has left fans both depressed and outraged, with an effigy of Sreesanth set alight on Thursday night in Bangalore. “We buy tickets to watch the matches and cheer on the players only to realize that some of them were just puppets in the hands of the bookies,” said Ajay Diwan, a fan from New Delhi.