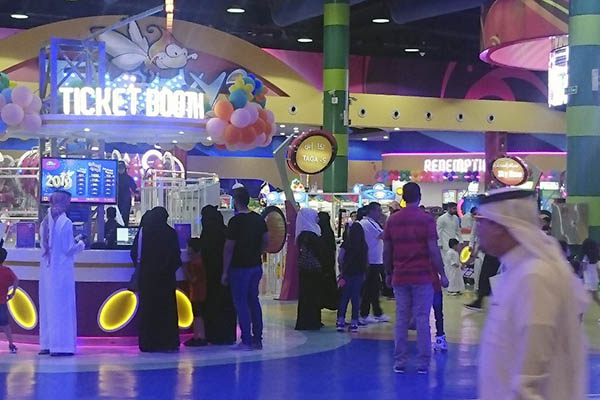 Saudis at a mall in Riyadh that remained open during Maghrib prayers. AFP

With burger patties sizzling over a hot grill, a Saudi eatery did the unthinkable as a muezzin’s call to prayer sent Muslim worshippers scrambling to lower their shutters: it stayed open. The scene, amid a sweeping reform drive, was a striking contrast to the days when religious police wielded unbridled powers and drove people out of malls and shops to enforce the Islamic world’s only mandatory prayer-time shutdown.

Last month Riyadh, keen to stimulate an economy hit by low oil prices, decreed that some businesses can stay open 24 hours a day for an unspecified fee. But the decision triggered confusion over whether it includes the five daily Islamic prayer times.

Stores in some Riyadh malls saw it as a nod-and-a-wink approach to avert a conservative backlash, testing what could be one of the most sensitive of a string of reforms in the ultra-conservative kingdom.

The burger shop manager showed AFP a text from its Saudi owner, instructing him to stay open: “The [government] decides to allow shops, restaurants and markets to work for 24 hours and the decision includes… prayer times.” It was among a handful of eateries in Riyadh’s upscale Kingdom Centre mall openly catering to customers during the sunset Maghrib prayer.

At another leading Riyadh mall, Al-Nakheel, a similar scene played out during the evening Isha prayer. While many retailers rolled down their shutters, several cafés and restaurants teeming with customers kept their cash registers ringing, while children continued to bounce around in an indoor amusement park.

“Most of the time stores here are [now] open during prayer time,” Francis, an Asian coffee shop manager, told AFP. Two other shop managers said they had paid no government fee to stay open, but were cautiously testing the waters, as officials appeared to be looking the other way.

“Those [workers] who want to pray can pray, those who want to work can work,” one of them said, pointing out that many were non-Muslim and had previously been obliged to idle away time. The other manager, who also requested anonymity due to the issue’s sensitivity, said he would still shut shop if confronted by the religious police.

Until three years ago, the religious police elicited widespread fear, chasing men and women out of malls to pray and berating anyone seen mingling with the opposite sex. But the bearded enforcers of public morality, whose powers have been clipped in recent years, are now largely out of sight.

Retailers could take advantage of “vague government statements to stay open, especially with the relative absence of the religious police that was responsible for enforcing the system,” said Eman Alhussein, a fellow at the European Council on Foreign Relations.

Following the pre-dawn Fajr prayer, shops in the kingdom typically have to close four times daily, with workers often out of action for more than 30 minutes. But it is too soon to know the financial impact of easing a restriction that members of the advisory Shura Council say costs the Saudi economy tens of billions of riyals a year.

Crown Prince Mohammed bin Salman has rolled out a series of reforms over the past two years, including allowing women to drive, reopening cinemas and reining in clerical power as he seeks to project a business-friendly image.

The reaction of arch-conservatives has so far been muted, given his parallel crackdown on dissent. But in a series of tweets last year, the religious police, officially known as the Commission for the Promotion of Virtue and the Prevention of Vice, said it was forbidden to keep stores open during prayer, calling it “one of the most important pillars of Islam.”

Last month, Saudi state media reported that the kingdom will allow round-the-clock trading—for what some local media said was a fee of up to 100,000 riyals ($27,000). But nothing was said about prayer times.

Confusion reigned after Saudi-owned Al-Arabiya television first tweeted that the decision included prayers, but quickly deleted it after a government official rejected the claim on air.

Saudi Arabia’s media ministry and the mall operators did not respond to requests for comment.

Not all shops are staying open, however. One Turkish eatery said it preferred to close during prayers as the vague government ruling offered “no guarantees” it would not be penalized.

Beyond large malls, shops also appear to be observing the shutdown, even as some operate on the quiet after rolling down their shutters. “Give it time,” said Amer, a Saudi pharmacist in his 40s, buying a coffee and dessert at Al-Nakheel during Isha prayer. “The government is testing reactions. If there is no [backlash] they might make it official.”