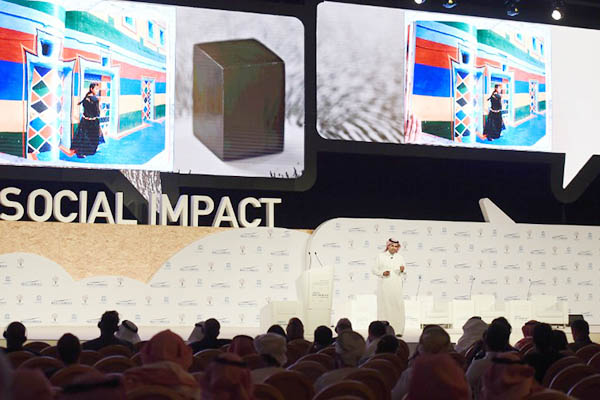 Artists in Saudi Arabia are pushing boundaries as the kingdom undergoes rapid change and tries to boost its cultural offerings, a Saudi artist who has exhibited worldwide told AFP.

Conservative Islamic traditions run deep in the country which critics say lacks both an infrastructure for the arts, and the freedom of expression to allow art to flourish. But Ahmed Mater, 37, calls the kingdom’s artists “brave,” although he says they need to show still more confidence and receive greater support.

“You know everything [is] changing now, life changing, artists pushing borders more and more,” he told AFP on the sidelines of the UNESCO NGO Forum which ended on Thursday in Riyadh.

Under wide-ranging economic and social reforms that began last year, Saudi Arabia said it would develop a Royal Arts Complex, as well as a Media City. A new General Entertainment Authority has already supported concerts, a Comic-Con pop culture festival and other events despite resistance from conservatives.

In January the kingdom’s highest-ranking cleric, Grand Mufti Abdulaziz al-Sheikh, warned of the “depravity” of cinemas and music concerts, partly because they represent a “call for mixing between sexes.” Saudi Arabia bans cinemas, although private film showings do take place and small art exhibitions have occurred. Wahhabi Islamic thought on which the kingdom is founded forbids paintings of the human form and frowns upon music.

Mater, a former physician, runs a “creative hub” studio in the Red Sea city of Jeddah, which is relatively more liberal than the capital Riyadh. Last year he published a photographic essay, “Desert of Pharan,” documenting Mecca, Islam’s holiest site which has undergone rapid urbanization. The work has been published internationally and Mater said it “should be approved soon” in Saudi Arabia.

In 2012 London’s Victoria and Albert Museum displayed his photogravure work “Magnetism,” which recalls crowds of Muslim faithful circling the holy Kaaba, the cubic stone structure at the heart of Mecca’s Grand Mosque toward which all Muslims pray. The picture, which he also exhibited at the Riyadh forum, is actually a magnet surrounded by iron filings.

“Creating change through art is something marvelous,” he told the forum organized with the MiSK Foundation, which Mater says has supported cultural projects in the kingdom. MiSK was founded by Deputy Crown Prince Mohammed bin Salman, who is pushing the kingdom’s economic and social change. “It’s really booming, the art and cultural movement,” Mater said. “I think it’s our time now.”