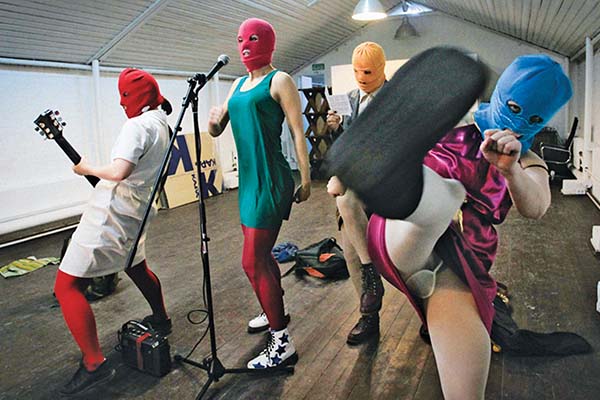 Freed from prison, a member of the feminist collective sets the record straight.

[dropcap]I[/dropcap]t was sloppy and lasted under a minute, but it sowed the seeds of discontent for future generations.

On Feb. 21, 2012, five members of the Russian feminist punk-rock collective Pussy Riot staged a guerrilla performance in the Cathedral of Christ the Savior, an Orthodox church in Moscow. Masked by their trademark multicolored balaclavas, the women mock-prayed, verbally swiped at Putin, and shouted epithets. The protest was cut short when security guards dragged the women offstage. A video of the performance, currently with more than 2.5 million views, was uploaded to YouTube with the title “Punk Prayer—Mother of God, Chase Putin Away!”

“We were protesting the vertical power and the authoritarian tendencies that exist within the Moscow patriarchy,” Yekaterina “Katya” Samutsevich tells Newsweek in a recent interview from Russia. “The Moscow patriarchy was instrumental in the passing of laws that were anti-women, as well as promoting laws against the LGBT community and minorities.”

The three convicted women became figureheads for a movement protesting Russia’s draconian rule of law. The documentary Pussy Riot: A Punk Prayer, which premiered this month in the U.S., chronicles their individual journeys to joining the group—which was formed on Sept. 24, 2011, the day Putin announced he would run for another presidency—and the subsequent trial that drew the world’s attention.

Samutsevich, 30, appealed her case on the grounds that she was tackled by a security guard before participating in the performance and was released on Oct. 10, 2012. Alyokhina’s and Tolokonnikova’s appeals, on the grounds they had not committed blasphemy, were both rejected. Tolokonnikova, 23, is serving her sentence at a penal colony in Mordovia, while Alyokhina, 24, is currently imprisoned in Berezniki, both in Russia. Alyokhina recently went on an 11-day hunger strike, alleging prison officials were trying to turn other prisoners against her by holding security lockdowns during work time and enacting tougher measures when transporting prisoners in the lead-up to her parole hearing on May 23 (she was denied). Her hunger strike ended on June 1, when officials agreed to loosen the security restrictions.

By Russian law, immediate medical attention should be given when someone declares a hunger strike. “It should be noted that the [prison] administration ignored her hunger strike for the first few days,” Samutsevich says. And contrary to news reports, Alyokhina wasn’t hospitalized, she adds.

Rumors of a rift between Samutsevich and the other two imprisoned women spread when stories surfaced hinting that Samutsevich had cut a deal with Russian authorities to be released, and that the two imprisoned women resented Samutsevich’s move to ditch their shared attorney in favor of a new one—who was able to get her individual sentence suspended. It also alleged infighting over Pussy Riot trademark filings.

Samutsevich, who isn’t allowed direct contact with her co-conspirators and communicates with them through letters written under different aliases, says it’s all lies. “We continue to fight for their freedom and the movement. Masha and Nadya have supported all my decisions, and we’re united in solidarity over issues like the trademark and the other scandalous things that were written.”

The struggle continues. On May 21, Russian lawmakers approved 304-4 a bill that locals have come to call the “Pussy Riot law.” The bill calls for up to one year in jail and fines of up to $9,400 for “public actions expressing clear disrespect for society and committed with intent to offend the religious feelings of the faithful”—more if committed in a house of worship.

“It shows the worsening situation in Russia as far as civil rights and freedom of expression are concerned,” Samutsevich says.

Meanwhile, the freed Pussy Rioter seems unsure whether the group will perform again in Russia any time soon. “I remain a member of the group, and I have no plans of going anywhere,” she says. “We’re still trying to figure out how we can perform while preventing future legal persecution. We’d like to have our performances in the same style, but I’m not sure what our future will hold.”