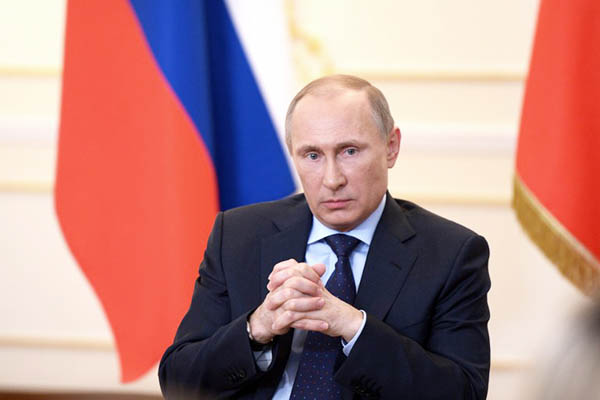 Russian President Vladimir Putin early on Thursday morning announced that he was launching a “military” operation in Ukraine, as the Ukrainian president imposed martial law in the country amidst reports of airstrikes targeting Kyiv’s military assets.

In a televised address, Putin claimed the military operation—being perceived as an invasion by a majority of the global community—was in response to threats from Ukraine. Maintaining that Russia did not wish to occupy Ukraine, he said the responsibility for the bloodshed laid with the Ukrainian “regime.”

The Russian president also warned other countries of dire “consequences” if they attempted to interfere with the Russian action. “I say to anyone who is considering intervention from the outside: If you do this, you will face far greater consequences than you have faced in history. All the necessary measures have been taken. I hope you can hear me,” he said in Russian.

Putin’s announcement came while a U.N. Security Council emergency session on Ukraine was underway Following Putin’s declaration. Requested by the Ukrainian foreign minister, it was summoned to urge the UNSC to examine the “escalation” of the situation in the Donetsk and Luhansk separatist regions after they requested Moscow to provide them military assistance.

Ukraine at the U.N.

He said that while Moscow had declared the war, it was the “responsibility” of the UNSC to stop it. “So I call on every one of you to do everything possible to stop the war,” he said. Welcoming the condemnation of Russian’s invasion of his country at the conclusion of the meeting, he urged Russian Ambassador to the U.N. Vassily Nebenzia to relinquish his duties as rotating of the council.

“There is no purgatory for war criminals,” Sergiy Kyslytsya said to Nebenzia. “They go straight to hell, ambassador.” Nebenzia shot back that Russia was not being aggressive toward the Ukrainian people but the “junta in Kyiv.”

In a video statement, Ukraine President Volodymir Zelenskyy declared martial law in the country and urged citizens not to panic. “We are working. The army is working,” he said. “Don’t panic. We are strong. We are ready for everything. We will defeat everyone. Because we are Ukraine.”

He claimed Russia had already hit military commands, airports and military depots in Kyiv, Kharkiv and Dnipro, while local reporters said air raid sirens could be heard over Kyiv shortly after the announcement.

There have been multiple reports of explosions reported in Kyiv and Kharkiv since Putin’s announcement. It is unclear, thus far, of the casualties incurred due to the conflict.

Shortly after explosions were reported in Kyiv and Kharkiv, U.S. President Joe Biden issued a statement declaring that Ukraine was suffering “an unprovoked and unjustified attack” by Russian forces. “President Putin has chosen a premeditated war that will bring a catastrophic loss of life and human suffering,” he said. “Russia alone is responsible for the death and destruction this attack will bring, and the United States and its allies and partners will respond in a united and decisive way. The world will hold Russia accountable,” he added.

The U.S. president said he would be closely monitoring the situation from the White House overnight, with a senior administration official telling CNN that “full scale” of sanctions would be announced later today. According to CNN, the U.S. has planned to target several Russian financial firms; and deploy export controls that would cut off Moscow from Western technology for entire economic sectors.

NATO Secretary General Jens Stoltenberg has also issued a statement on Russia’s unprovoked attack, criticizing Putin for putting “countless civilian lives” at risk. “Once again, despite our repeated warnings and tireless efforts to engage in diplomacy, Russia has chosen the path of aggression against a sovereign and independent country,” he said. “This is a grave breach of international law, and a serious threat to Euro-Atlantic security,” he said, adding, “I call on Russia to cease its military action immediately and respect Ukraine’s sovereignty and territorial integrity. NATO allies will meet to address the consequences of Russia’s aggressive actions.”

The NATO chief said the organization would stand with Ukraine and would do all it takes to protect and defend its allies.

Prime Minister Imran Khan, in Moscow on a two-day official tour, is set to have a one-on-one meeting with the Russian president later today. Observers have described the timing of the trip as “unfortunate,” noting it risks the world perceiving Pakistan as joining the “Russian camp” in the ongoing conflict. Pakistan, however, has maintained that it does not believe in “camp politics” and is only engaging with Russia on bilateral matters. The Ministry of Foreign Affairs has also stressed that this visit was organized far ahead of the current situation and has nothing to do with the unfolding conflict.