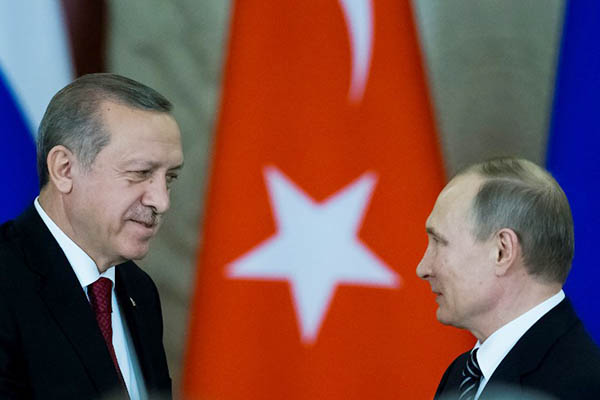 Two years after rift developed between Moscow and Ankara, leaders of both nations hail return to ‘normalization.’

Russia’s President Vladimir Putin and his Turkish counterpart Recep Tayyip Erdogan on Friday announced the “normalization” of ties between their nations, damaged by Ankara downing one of Moscow’s warplanes in 2015.

“We can state with confidence that our countries have returned to the path of a true multi-tiered cooperation between partners,” Putin told a press conference after the two strongmen met at the Kremlin.

Relations between Moscow and Ankara hit rock bottom after Turkey’s shooting down of a Russian warplane over the Syrian border in November 2015, which Putin then labeled a “stab in the back.” The two have reconciled since, notably cooperating on Syria and backing a ceasefire in December, which significantly reduced violence in the war-wracked country.

“In the last few months, the steps we have taken together have meant we have closed the gap in normalizing bilateral relations,” said Erdogan. “I believe the normalization process has ended. We don’t want to utter this phrase any longer,” he said, adding he expected Russia to “completely lift the sanctions” imposed after the plane’s downing.

The two leaders also signed a new economic cooperation plan and agreed to create an investment fund worth up to $1 billion, said Putin. The Russian leader hailed the joint efforts on Syria, crediting the coordinated actions of Russia, Turkey and Iran for “considerably lowering the level of violence.” He said Russia and Turkey will “continue cooperation in the fight against terrorist groups, especially ISIL.”

“Be it in Syria or in Iraq, in both countries our main objective is territorial integrity,” said Erdogan.

Earlier this week, top generals of Turkish, Russian and U.S. militaries met in a bid to step up coordination in Syria and avoid clashes. Turkey initially had threatened to strike former I.S. bastion Manbij unless the U.S.-backed Kurdish militia pulled back from the city, but later retracted the claim. Erdogan said Friday that Ankara wants to cooperate with U.S.-backed coalition and Russian forces there.