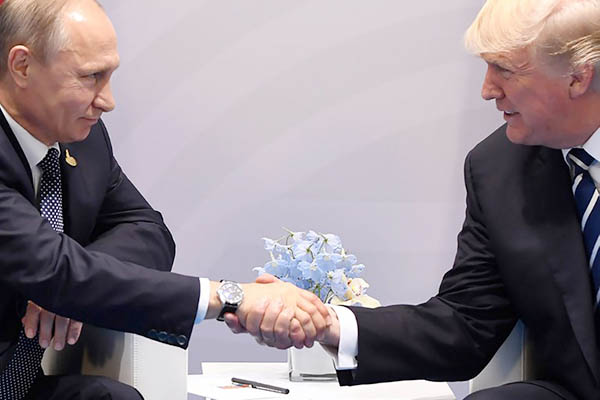 President Vladimir Putin said Saturday he expects Russian-U.S. cooperation will improve under Donald Trump and that the American is “very different” in real life.

The comments came a day after the pair held talks in Hamburg, their first face-to-face encounter. “The Trump that you see on TV is very different than the real Trump,” Putin told reporters at the G20 in Germany. “He perfectly understands whom he is talking to and answers questions quickly. I think personal relations were established.”

Putin said he was positive about repairing U.S.-Russian relations, which plunged during the era of president Barack Obama. “There is every reason to believe that we will be able to at least partially re-establish the level of cooperation that we need,” Putin told a news conference. “I very much hope [for an improvement in relations] and it seems to me that some basis for this has already been created,” Putin said.

Putin said that in particular the U.S. appeared to be less rigid on the war on Syria, where Moscow backs President Bashar al-Assad and Washington has sided with rebel groups. “It seems to me that the U.S. position [on Syria] has become more pragmatic. There is a comprehension that if we combine our efforts, we can achieve a lot,” the Russian president said.

Russia and the U.S. have agreed to a memorandum of understanding on creating a de-escalation zone in southwest Syria from midday Sunday, Russian Foreign Minister Sergei Lavrov said Friday. Lavrov said the ceasefire set to begin Sunday would be supervised by Russian military police “in coordination with the Jordanians and Americans.”

Regarding allegations that Russia meddled in the U.S. presidential election in 2016, Putin said that Trump in their meeting had accepted the Russian’s denials. “Trump asked a lot of questions [on the issue] and I answered him. It seems to me that he acknowledged and accepted [the answers],” Putin said.

Trump has not spoken about the meeting other than to say earlier Saturday that it was “tremendous.”

According to U.S. Secretary of State Rex Tillerson, who was present in the two-and-a-quarter-hour meeting, Putin and Trump had a “very robust and lengthy exchange on the subject.” Asked as he was leaving the news conference if Trump had accepted Putin’s denials, Tillerson did not answer, noting only that the two leaders “connected very quickly” and there was a “very clear positive chemistry between the two.”

“There are so many issues on the table… Just about everything got touched upon… Neither one of them wanted to stop,” he said. “I believe they even sent in the [U.S.] First Lady at one point to see if she could get us out of there, but that didn’t work either… We did another hour. Clearly she failed.”

Trump’s wife Melania sat next to Putin at Friday’s G20 gala dinner, and photos gave the impression that the two appeared to hit it off.