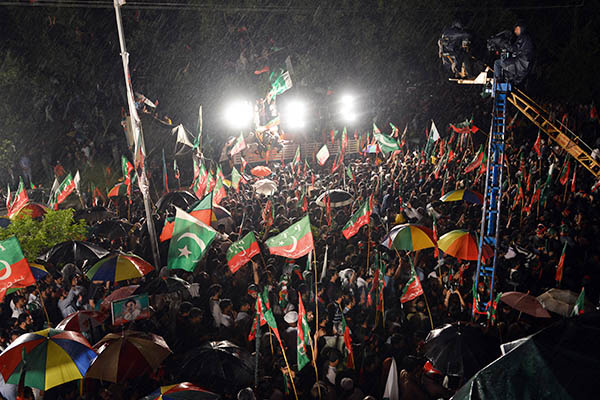 Populist cleric says government has 48 hours to accept his demands to step down or face the consequences.

Thousands of opposition demonstrators crowded the streets of Islamabad for a second day on Sunday, after a populist cleric issued a 48-hour ultimatum demanding the resignation and arrest of Prime Minister Nawaz Sharif.

The ultimatum came as protesters led by Tahir-ul-Qadri and cricketer-turned-politician Imran Khan converged on Islamabad from Lahore to press their demands.

Khan on Saturday called on Sharif to step down, lashing out at the government he claims was elected fraudulently. Khan was due to outline his party’s demands to the government during an address to the protesters Sunday afternoon, according to Shireen Mazari, a spokeswoman for his Pakistan Tehreek-e-Insaf (PTI).

“We will not go back until all our demands are accepted,” Khan said earlier, demanding that all the officials involved in the alleged vote rigging be tried under the treason law. However, early on Sunday morning, he left the venue and returned to his home in Bani Gala, leaving the protesters without any leadership until a scheduled 3 p.m. address.

Late Saturday he also warned Sharif to resign or else his supporters would enter the high security “Red Zone” of the capital on Sunday where top government buildings and embassies are located. The statement prompted condemnations of both Qadri and Khan from opposition parties, including the Pakistan Peoples Party and the Muttahida Qaumi Movement.

The May 2013 general elections saw Sharif take power in a landslide, and international observers who monitored the polls said they were free and credible. The demonstration is the culmination of a “long march” that set off Thursday from Lahore to try to topple the government. The march, announced as a “million man” march by Khan, has yet to attract large crowds with official estimates placing the total number of protesters at less than 35,000.

Qadri has already issued his demands calling for Sharif’s arrest over what he alleged was the murder of his supporters and for the installation of an interim national government. The cleric, who late Saturday issued a 48-hour ultimatum to the government to accept his demands, said he would not be responsible for any repercussions if they were not met.

He said Sharif and his younger brother Shahbaz Sharif, who is chief minister of Punjab province, had no right to sit in the government, their cabinets should be dissolved and they should be arrested on murder charges.

On June 17, at least 10 workers of Qadri’s Pakistan Awami Tehreek (PAT) workers were killed in clashes with police at his headquarters in Lahore and a judicial commission was formed to probe the killings.

Analysts warned there was no possibility of a quick solution to the impasse. “Apparently there are no signs that the government and the two parties are working towards a solution of the problem … both are sticking to their position leading to a deadlock,” said analyst Hasan Askari. “If political leaders fail to resolve this problem and violence starts then the initiative will shift to the military—either to mediate the problem and see to it that the stalemate is resolved,” he said, adding “This will further increase the military’s clout in Pakistan.”

Security in Islamabad has been ramped up in recent days, with some 30,000 police and security forces on the streets. The government has agreed to allow the two groups to hold rallies but many of the streets are blocked off with shipping containers to protect sensitive areas.

Interior Minister Chaudhry Nisar said that security agencies had issued an alert about two suicide bombers hiding in Islamabad and adjoining Rawalpindi. “There is a grave danger of terrorism and reports of the arrival of two suicide bombers in Rawalpindi and Islamabad, but we are providing security,” Khan said.