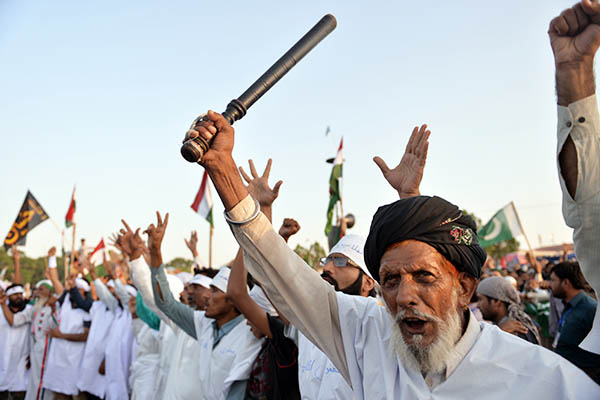 Supporters of Qadri at his rally in Islamabad. Aamir Qureshi—AFP

Populist cleric and cricketer-turned-politician Khan have both ended talks with the government.

Populist cleric Tahir-ul-Qadri announced late on Wednesday that negotiations to end ongoing protests for a “revolution” had collapsed, and warned the government that he would lead a ‘Youm-e-Inquilab’ (Day of Revolution) today.

“The government has shown that it is not interested in implementing Lahore High Court orders to register a First Information Report against Prime Minister Nawaz Sharif, Punjab Chief Minister Shahbaz Sharif, and 19 others,” said Qadri to a crowd of thousands camped out on Islamabad’s Constitution Avenue. “So I am announcing that there will be no more talks with the government.”

A government team comprising ministers Ishaq Dar and Zahid Hamid had visited Qadri on Wednesday night in a bid to convince him to call off his sit-in and agree to a compromise on his demands. According to Qadri, he had asked them to meet two conditions as “trust building” measures, but they failed to comply. “I asked them to launch the FIR against all 21 accused as per court orders and for the resignation of Shahbaz Sharif,” he said. “The government team told me that the prime minister is not willing to accept either demand and I ended the talks because it became obvious the government was only trying to waste our time,” he added.

“We gave every possible chance to the government to show maturity and follow court orders … now there is no moral obligation on us to continue with talks,” said Qadri. “Tonight is the last night of the sit-in. Tomorrow will be Youm-e-Inquilab and the people will decide what action should be taken against the government,” he added. Qadri directed his followers to assemble at 3:00 p.m., saying he would address a final sermon before “transferring decision-making powers” to the people.

The protests in Islamabad have so far been peaceful, with security forces taking a hands-off approach to the demonstrations. But both protest leaders have stoked fears of an imminent violent crackdown, with Qadri telling supporters he was ready to be “martyred” as his followers dressed in funeral shrouds during a rally on Wednesday.

Pakistan Tehreek-e-Insaf chief Imran Khan, who is leading a parallel protest of his followers in Islamabad against alleged rigging in the 2013 general elections, also announced that negotiations with the government had collapsed. He said there could be no more negotiations until Prime Minister Nawaz Sharif had resigned. The government has said it is willing to accept all demands except for the resignation of the prime minister. “Tomorrow, I will give you good news,” Khan told his supporters, adding that it would be a “major” announcement.

Responding to Qadri’s claims, information minister Pervez Rashid told media that the government had accepted the cleric’s demands for the registration of an FIR, but he had refused to accept the offer.

Mr pervaiz is lying they dont want to register fir instead theve appealed against it..And are framing some policeman to take thw blame.How can they shoot without their orders . DONT BELEIVE THESE CORRUPTED THEY WERE DOING AN OPERATION TO KILL DR TAHIRULQADRI S FAMILY…THEY DONT WANT TO GIVE JUSTICE TO POOR PEOPLE THEY THINK THEM AS INSECTS.WHY DO YOU THINK PEOPLE IN MASS NUMBERS ARE SITTING IN ISLAMABAAD FOR 15 16 DAYS..THEY DONT WANT TO DELIVER TO NORMAL OR POOR MAN.HE RANTS ABOUT DEMOCRACY BUT FOR HIM AND ALL ASSEMBLY MEMBERS DEMOCRACY IS CORRUPTION AND FILLING THEY OWN BANK BALANCE. THERE IS NO CLEAN WATER FOOD HEALTH EDUCATION JOBS HOMES OR JUSTICE FOR THE NORMAL OR POOR MAN. EVERYTHING IS JUST FOR THE WEALTHY THAT IS THEY WAY OF DEMOCRACY. WHY DO YOU .DR TAHIRULQADRI IS FIGHTING THIS FOR ONLY TO GET RIGHTS DELIVERD TO THE POOR OR NORMAL MAN.IF THEY WERE DELIVERING WOULD ALL THEM PEOPLE BE SITTING THERE IN SO HOT AND UNCOMFORTABLE CONDITIONS.