In statement, Emiri Diwan says investments will include various sectors of Pakistan’s economy 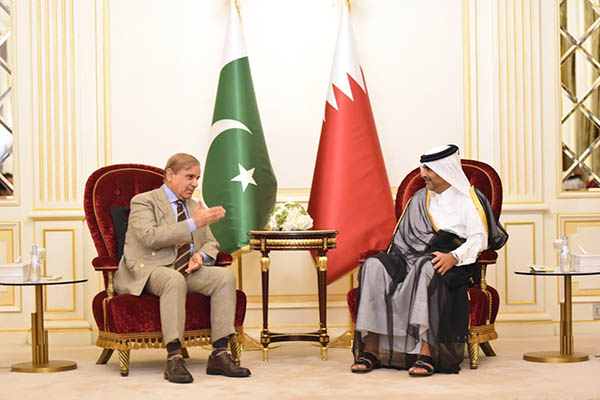 The office of Qatar’s leader on Wednesday confirmed the Qatar Investment Authority (QIA) plans to invest $3 billion in Pakistan to help support its economy.

“The Qatar Investment Authority announced its aspiration to invest $3 billion in various commercial and investment sectors in the Islamic Republic of Pakistan,” read a brief statement issued by the Emiri Diwan after a meeting between Prime Minister Shehbaz Sharif and Qatari Ameer Sheikh Tamim bin Hamad al-Thani in Doha.

“His Highness stressed the importance of the brotherly and strategic relations between the two countries and their aspiration to enhance economic partnership by raising trade exchange and promoting investments through the Qatar Investment Authority,” it added.

According to Bloomberg, Qatar’s $445 billion sovereign wealth fund is currently assessing various strategic investments in key economic sectors of Pakistan. Citing earlier reports, it said the investments were likely to focus on Pakistan’s airports in Islamabad and Karachi, as well as renewable energy, power and hospitality. “The fund may end up investing more or less than $3 billion depending on the asset valuations and opportunities, the people said, without sharing a time frame,” it cited officials as saying.

A day earlier, Reuters reported that Pakistan was planning to offer Qatar shares in state-owned enterprises as part of measures to attract investment into the country. Islamabad is also hoping to secure a new LNG deal to shore up fuel for electricity generation.

In a statement issued after the meeting between Sharif and Qatar’s emir, the Prime Minister’s Office said they had agreed to increase bilateral trade, deepen collaboration in agriculture and food sectors and boost cooperation in energy, renewable energy, tourism and hospitality segments. They also agreed to expand cooperation in defense, aviation and maritime sectors, it added.

It said the premier had thanked the emir for Doha’s support in meeting Pakistan’s energy needs through its long-term partnership in the LNG sector, adding both leaders also discussed new avenues for mutually beneficial cooperation in the energy sector.

According to the statement, Sheikh Tamim reassured Sharif of Qatar’s commitment to forging a stronger economic partnership with Pakistan. Meanwhile, it said, Sharif had thanked the emir for the Qatar Investment Authority’s readiness to invest $3 billion in Pakistan.