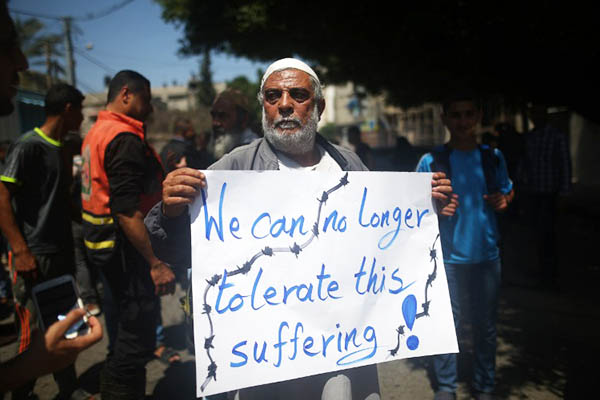 Gulf state has pledged to pay one month’s salary for all public sector employees in restive region.

The wealthy Gulf state of Qatar has pledged to pay one-month salaries for public sector employees in Gaza, to help “alleviate the suffering” caused by the Israeli blockade, state media said.

The emir of Qatar, Sheikh Tamim bin Hamad al-Thani, has ordered paying a total of 113 million rials ($31 million), which is the total wage bill for one month in the strip ruled by Islamist movement Hamas, QNA state news agency said late Thursday. This is to “alleviate the suffering of the brothers in [the Gaza] Strip and [ease] the severe financial hardship they are facing due to the unjust blockade imposed by the Israeli occupation,” it said.

Gaza has been subjected to a stringent Israeli blockade since 2006, with construction materials tightly controlled for fear militants could make use of them to forge arms or build fortifications.

Hamas hired more than 40,000 people after it seized Gaza in 2007 following deadly clashes with militants of Fatah, the party of Palestinian president Mahmud Abbas. But after a reconciliation deal with Abbas that led to the formation of a West Bank-based national unity government in June 2014, Hamas relinquished responsibility for paying salaries.

Hamas has technically handed power to the unity government but it remains in de facto control of Gaza. Abbas’ West Bank-based Palestinian Authority (PA) initially refused to pay the workers.