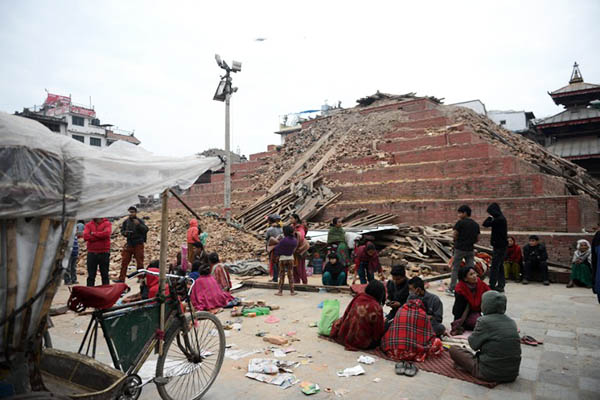 Experts say damage caused by April 25 quake is too extensive to be completely repaired.

Reduced to piles of rubble and splintered wood, Nepal’s rich cultural heritage has suffered a devastating blow from a massive earthquake that tore through the country, experts said Sunday.

In the heart of Kathmandu, many of a cluster of temples and statues built between the 12th and 18th centuries by the ancient kings of Nepal have collapsed, killing scores and trapping others underneath. The nine-storey Dharahara tower, a major tourist attraction in the city’s Durbar square with its spiral staircase of 200 steps, was reduced to just its base when the 7.8-magnitude quake struck at lunchtime on Saturday.

“I had just bought tickets to climb the tower and was at its base when I felt a sudden shaking,” Dharmu Subedi, 36, said from a hospital bed in Kathmandu. “Within minutes, the Dharahara had crumbled to the ground with maybe more than 100 people in it,” he added.

UNESCO was trying to gather information on the extent of the destruction, including at three palace-filled squares in the cities of Patan and Bhaktapur, both former kingdoms in the Kathmandu Valley, as well as in Kathmandu. “We understand the historic Durbar squares of Kathmandu, Patan and Bhaktapur have been badly damaged,” said Christian Manhart, UNESCO’s representative to Nepal. “Several temples have collapsed. Two temples in Patan have been completely collapsed, and Durbar Square [in Kathmandu] is worse. Right now we are assessing the situation, and collecting information on what the damage is. All U.N. agencies have received a request from the [Nepalese] government for assistance,” he added.

He said it was too early to talk about reconstruction of the monuments and how much assistance UNESCO could provide.

Manhart said his office was also trying to determine whether another UNESCO World Heritage site, that of Lumbini, the place where Buddha was born more than 2,600 years ago, had also been hit. “We haven’t received reports of severe damage in Lumbini, but we are still trying to collect information,” he said of the site, some 280 kilometers west of Kathmandu.

In Kathmandu, residents were seen clawing through the rubble, using their hands, buckets and shovels to try to find those feared trapped in Durbar Square, which had been crowded on Saturday with local and foreign tourists. Large piles of bricks, wooden beams and other debris were dotted throughout the historic square, where minutes earlier stood double-roofed temples and other monuments built by the Malla kings.

The monuments are the “social, religious and urban focal point of the city” which has a rich history of Hindu, Buddhist and Tantrism religion and culture, UNESCO says on its website. “Kathmandu with its unique architectural heritage, palaces, temples and courtyards has inspired many writers, artists, and poets, both foreign and Nepalese,” it says.

Expert P. D. Balaji cast doubt on whether the monuments could be completely rebuilt, saying television footage showed extensive damage. “What I can say is that it’s an irreparable loss for Nepal and the rest of the world,” Balaji, head of the history and archaeology department at the University of Madras, said. “Complete restoration is not possible on account of the extensive damage to the historical sites in Nepal.”

According to UNESCO, “two catastrophic earthquakes” in 1833 and 1934 led to some monuments in the Kathmandu Valley being rebuilt.