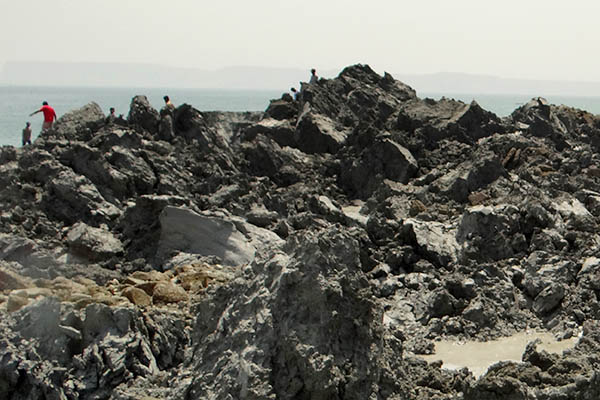 Seismologist says island is a body of mud that will be broken down by wave activity over time.

A small island created in the Arabian Sea by the huge earthquake that hit southwest Pakistan has fascinated locals but experts say it is unlikely to last long.

The 7.7-magnitude quake struck on Tuesday in Balochistan’s remote Awaran district, killing more than 200 people and affecting hundreds of thousands.

Off the coastline near the port of Gwadar, some 400 kilometers from the epicenter, locals were astonished to see a new piece of land surface from the waves. “It is not a small thing, but a huge thing which has emerged from under the water,” said Gwadar resident Muhammad Rustam. “It looked very, very strange to me and also a bit scary because suddenly a huge thing has emerged from the water.”

Mohammad Danish, a marine biologist from Pakistan’s National Institute of Oceanography, said a team of experts had visited the island and found methane gas rising. “Our team found bubbles rising from the surface of the island which caught fire when a match was lit and we forbade our team to start any flame. It is methane gas,” Danish said on GEO television news.

Gary Gibson, a seismologist with Australia’s University of Melbourne, said the new island was likely to be a “mud volcano,” created by methane gas forcing material upwards during the violent shaking of the earthquake.

“It’s happened before in that area but it’s certainly an unusual event, very rare,” said Gibson, adding that it was “very curious” to see such activity some 400 kilometers from the quake’s epicenter.

The so-called island is not a fixed structure but a body of mud that will be broken down by wave activity and dispersed over time, the scientist said.

A similar event happened in the same area in 1945 when an 8.1-magnitude earthquake at Makran triggered the formation of mud volcanoes off Gwadar.

Professor Shamim Ahmed Shaikh, chairman of the department of geology at Karachi University, said the island, which has not been named, would disperse within a couple of months. He said it happens along the Makran coast because of the complex relationship between tectonic plates in the area. Pakistan sits close to the junction of three plates—the Indian, Arabian and Eurasian.

“About a year back an island of almost similar size had surfaced at the similar distance from the coast in the Makran region. This would disperse in a week to a couple of months,” said Shaikh.

For example, in the massive 9.5-magnitude earthquake in Chile in 1960—known as the world’s largest ever—whole fishing villages were thrust “several meters” upwards and wharves suddenly located hundreds of meters inland, Gibson said.

Such uplift events are relatively common in the Pacific’s so-called “Ring of Fire,” a hotbed of seismic and volcanic activity at the junction of several tectonic plates.

A thundering 8.0-magnitude quake in the Solomon Islands in 2007 thrust Ranogga Island upwards by three meters, exposing submerged reefs once popular with divers and killing the vibrant corals, expanding the shoreline outwards by several meters in the process.