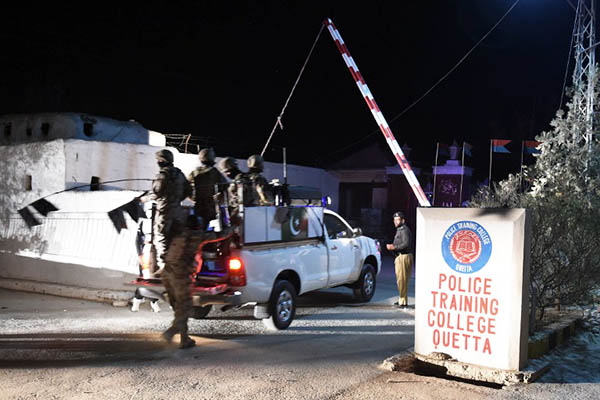 The attack on Police Training College is a failure of security and intelligence.

Let’s begin with the known.

Three terrorists attacked the police training college in Quetta at around 2310 hours on Monday. Their modus operandi was the same as employed in several such attacks: all were wearing IED belts and were armed with AK-47 assault rifles and multiple ammo clips. It was a suicide mission with no extrication plan. They had come to kill and get killed.

In nearly four hours of fire-fighting, they killed 59 police cadets, young men between the ages of 17 and 25 and, until last reports, had injured 120, some of them critical.

What does one make of this attack, one of the worst against a security forces establishment this year?

The college houses around 700 recruits and is about 20km south of the heart of Quetta city. It lies off Sariab Road, which is also called Bolan Road as one crosses the Old Custom Chowk to the south. Towards the left after some distance is situated the Sariab police station. Further down and again to the left is the sprawling compound of the college. There are no populated areas in and around the college.

The Sariab Road has long been considered a very sensitive area and terrorists have attacked and targeted security forces on this road for almost a decade. The police college itself has come under rocket attack a few times in the past. Given the nature of the operations being conducted against multiple terrorist groups by the security forces, since the beginning of Ops Zarb-e Azb, the college, like many other such facilities, was an obvious target for a terrorist attack. Put another way, the question was not whether the college could be attacked. It was when it will be attacked. That question was answered on Monday night.

The IG-FC Balochistan, Maj.-Gen Sher Afgun has said that communication intercepts reveal the attackers belonged to the Al-Alami faction of the Lashkar-e-Jhangvi (LJ) militant group. LJ has not claimed responsibility yet but the Islamic State militant group has, through its Amaq twitter handle, releasing photos of the three suicide attackers, one of whom looks like a Uighur or could be an Uzbek.

The Balochistan home minister, Sarfaraz Bugti, has said the attack was planned in Afghanistan and the attackers were communicating with their handlers in that country. The interior minister, who in a twist of irony, was addressing the graduation parade of police officers in Islamabad, said that the war was not over but that the enemy had been weakened. From an attack almost every day, he said, they now attacked every few months. While the minister might be statistically correct, loss of life despises statistics. The minister’s statement, come as it did with 59 dead and 120 fighting for their lives, was in very poor taste, though perfectly in synch with the minister’s known personality.

However, what the interior minister did not talk about was how such a brazen attack could be mounted in the first place. This is also a question for Balochistan’s home minister. If the federal and Balochistan governments know and are convinced, we assume on the basis of solid intelligence, that hostile agencies are targeting the province, then one has to question them hard and relentlessly on what measures have been taken, or are being taken, to counter multiple threats. It shouldn’t need an IQ level higher than even the combined IQ level of Nisar Khan and Sarfaraz Bugti to realize that the nature of the threat would require more effort than is being made. But apparently it does because for all the post-attack rhetoric and shibboleths, neither minister has any legs to stand on. Here’s why.

The college is located away from populated areas and covers a large area. It is a security establishment but houses recruits who are not battle hardened. They are still in the process of being trained. They are no match to highly-trained and motivated attackers. This means the college, once someone manages to get in, is a soft, not a hard target. How does one protect it?

Not the way in which it was being “protected.” It should have been obvious that it could and will be targeted. That means providing at least three layers of security, static and mobile to the college: an outer cordon, perimeter security and an inner cordon. Any sensible person, except the geniuses governing us, would know that an attack would aim to target the recruits and attempt to kill as many as is/was possible before reinforcements come in. The security plan, therefore, should have been chalked out and drill-practiced precisely to thwart that. This is where the three-layered defense comes in. The attackers should first have been engaged by the outer cordon. If they still managed to slip through, they should have been engaged by perimeter security. If someone could still go through, quite improbable, if not impossible, he/they would be engaged by the inner cordon.

In reality, none of this happened because there were no layered defenses. A watchtower sentry was engaged and neutralized and from there it was a matter of climbing the wall and it was all clear for the attackers to the barracks and the hostels. Whatever engagement happened was not according to any plan because once they were in, they could take advantage of darkness and the responders probably shot at the shadows more than at the attackers. This is why drill-practicing responses is so vital. You practice all contingencies. You know who has to move where and what area(s) you must confine the attackers to. The approaches to vulnerable points have to be covered. In the heat of the battle things can still go awry but practice is always great help in getting things right.

The ministers, who are now trying to put the best face on a big tragedy and failure, have woken up post-attack, as they always do. They shall be asleep again, until another one happens.

Meanwhile, this is also a failure of the Inter-Services Intelligence, tasked with collecting, collating and analyzing strategic intelligence. If they know that the planners are sitting in Afghanistan, what measures have they taken to pick up the chatter to preempt such large-scale attacks. The ISI has also wrested for itself the job of counter-intelligence and terrorism. It combines in a single body the roles of MI6 and MI5. Its failure, therefore, is at both ends, external and internal.

This is what I wrote on June 30, 2014 for this magazine captioned, Perpetual Conflict: “Operation Zarb-e Azb is on. Prime Minister Nawaz Sharif says the country has embarked on a decisive battle against terrorism. In a press briefing, the military spokesman was reported as saying much the same.

The ministers and the military leadership do not have to tell us now that this is a long haul. Some of us have known this for a long time, much before Zarb-e Azb began. We also know that putting an end to this is not just a function of using kinetic force and intelligence operations. To that end, our policymakers will have to rethink the entire security paradigm. Until that happens, the tap will remain open and we will keep mopping up the floor.

So what is going to be done next? Another meeting??