Home Lightbox Quetta Will Be Repeated

Quetta Will Be Repeated 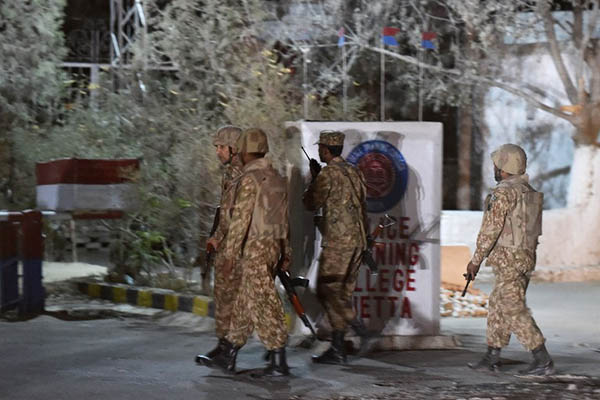 There is much work to be done before Pakistan can hope to put a halt on terrorist attacks.

Monday night’s terrorist attack on Quetta’s police college should force the policymakers, whether in civvies or mufti, to consider some obvious points.

One, from accounts of the survivors and the injured, it is now abundantly clear that the college was woefully and criminally unprotected against a dedicated, coordinated suicide attack. The low perimeter wall has been the talk in the media but physical protection of a vulnerable area (VA) is not just a function of high walls, though they are important if constructed properly and afford a difficult obstacle, especially if there are moats on both sides. Even so, an obstacle in any conflict situation is not defined as a structure or measure that will definitively stop the enemy. It is a measure or set of measures that will frustrate and delay the enemy, cause him damage and earn the defenders vital time for reinforcements, redeployment or tactical withdrawal, as required by the situation. So, yes, a wall is important, but it must be supplemented with layered defenses.

In the case of this VA, even the very basic defenses weren’t in place and once the watchtower was neutralized, the attackers had unhindered access to their targets. They shot and killed hapless recruits with impunity until the Quick Response Force and other troops arrived and exchange of fire began.

Two, the responsibility for this lies squarely on the provincial government and the police high-ups. But the inefficiency of the police must also be placed within the systemic rot that does not let the police officers work to their potential, leaving the force under-trained, ill-equipped and demoralized. The obsequious manner in which the IGP Balochistan is seen requesting funds from the chief minister is a case in point.

Three, the 20-point National Action Plan (a misnomer) mentions setting up the special courts as point number 2. The reform of the criminal justice system, of which ladder the police is the first rung, is point number 20. Despite the passage of two years, not much work has been done. To a large extent, this is because policing is a provincial reserve and different provinces have different capacities and budget allocations for the police. There is no federal police force with jurisdiction across the country. The Federal Investigation Agency does not have that capacity.

Four, we are still confused about which of the two policing models we want to adopt: Roman or local. The former (existing in most Central and East European countries) envisages the police as a central, national force; the latter looks at policing as a local affair. We have a hybrid model, with policing neither entrusted to the federal nor to local governments but to the provinces. Local police forces cannot stand alone in the absence of viable metropolitan governing structures. No one seems interested in such devolution.

Additionally, we have yet to differentiate, in any meaningful, legal way, the distinction between urban and rural policing. Absolutely no work is in the pipeline toward reforming the police in terms of reconfiguring the force structure. The non-movement is because of political interference, Pakistan Administrative Service and the Police Service of Pakistan. Some measures to improve policing have been taken in the Punjab, Khyber-Pakhtunkhwa and Sindh but the basic force configuration remains untouched. Balochistan is anomalous because 95 percent of its area remains outside the police jurisdiction. That also has a telling impact on budget allocations, training, morale and incentives for the force without having any impact on the PSP cadre that is seconded to the provinces and has a different service structure, being a federal cadre.

Corollary: nothing much will change in the wake of Monday’s horrific attack because what made the attack so successful, apart from the meticulous planning by the terrorists, is systemic problems that no one wants to address.

Five, the federal government should set up an advisory board consisting of former police and intelligence officials. Some of them like Tariq Khosa and Tariq Pervaiz, among others, bring immense experience to the table. Their services should be utilized. This group can advise the federal and provincial governments on what measures they should take for maximum utilization of their resources and intelligence agencies.

Six, we need to move to the broader problem. The responsibility has been claimed by Daesh. The Al-Alami faction of Lashkar-e Jhangvi says Daesh conducted it in collusion with their group. The attackers belonged to Daesh. The LeJ is suggesting that the planning and logistics for the attack were arranged by it. The claim has, once again, raised the question of Daesh’s presence in Pakistan. What exactly does this mean?

Two things are important in analyzing this question: one, Daesh, on a number of occasions, has made false claims and tried to appropriate small cells and individuals as theirs after an attack. Two, under pressure in Syria and especially in Iraq, Daesh is losing territory and fighters and is looking for new territories. Libya is a good example of that. In our neck of the woods, multiple groups affiliated with the Tehreek-e-Taliban Pakistan have declared allegiance to Daesh. This has to be seen within the larger context of the ideological/allegiance war between Daesh and Al Qaeda. While AQ’s Ayman Zawahiri has tried to put an end to it, Daesh has openly insulted Zawahiri and attacked AQ interests in Syria, Yemen and elsewhere.

Jihadi fora, since the declaration by Abu Bakr Baghdadi, of a caliphate have debated this rift. While AQ still remains the broader umbrella, Daesh has been finding affiliates in Pakistan, Afghanistan, Bangladesh, Yemen, Libya and AQIM. So far, however, there’s no information on funds coming from Daesh to groups in Pakistan even as counterterrorism officials concede that people have traveled from here to Iraq and Syria.

There are also reports of Chechen, Uzbek and Uighur fighters now relating to Daesh. This is the detritus floating in ungoverned spaces of Afghanistan. Many of them, if CT officials in Pakistan are to be believed, are used by Afghan National Directorate of Security to launch attacks inside Pakistan.

Seven, this then brings us to the issue of relations with Afghanistan. While Pakistan has to take measures to preempt and stop attacks, the situation cannot be brought under control while these groups continue to operate freely from another country and have sanctuaries there. Effectively engaging them in Afghanistan requires cooperation with Kabul and that cooperation is linked to the larger problem of normalization of relations. That is where the problem becomes terribly complex and requires a rethink. But rethink itself is a catch-22 because Pakistan is not only acting but also reacting to what its neighbors are doing. To what extent does Islamabad have space for a rethink is a question that can only be answered if one has a complete picture of what’s happening overtly and covertly.

But if it is accepted that the sanctuaries will remain and normalization will not work, then we need to be prepared for more such attacks and damage. Seen from that perspective, those who will die in such attacks will be the collateral in a much bigger game.