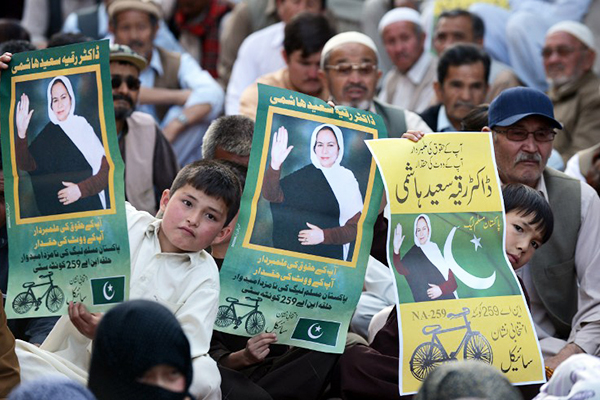 In Quetta, epicenter of sectarian bloodshed in Pakistan, the Shia are braving death threats to make themselves heard in Saturday’s election.

Shia Muslims constitute around a fifth of Pakistan’s population of 180 million, but they are caught in a rising tide of sectarian hatred, targeted by extremist Sunni bombers, and vilified on the campaign trail. Quetta, capital of Balochistan, has been a focus for much of the violence. Two devastating bombings earlier this year killed nearly 200 people from the city’s ethnic Hazara Shia population. The attacks were claimed by Lashkar-e-Jhangvi, a banned Sunni extremist organization with links to Al Qaeda which vowed to strike again.

Authorities have stepped up security in some Hazara districts of Quetta, but those running for office say the threats to their lives are so great that they are unable to move around freely to canvass for votes.

Dr. Ruquiya Hashmi, a former soldier, faces a double challenge: as well as being Hazara she is also the first woman to run from Quetta for the National Assembly. For the past few days she has had threatening phone calls and letters sent to her offices. But the Pakistan Muslim League candidate is determined to stand up to the extremists.

“I’m lucky I’m a very brave woman. It’s very challenging being a woman, being a Hazara, but God willing, I will face the challenges and I will raise my voice,” she said. The threats mean that Hashmi, an energetic 62-year-old whose husband is running for the provincial assembly, has had to abandon traditional rallies and take her campaign door-to-door, pressing her leaflets onto voters with a bright, reassuring smile.

The dangers are real. On April 23, a suicide bomber blew up his car at one of the checkpoints at the entrance to a Hazara district, killing six people. Abdul Khaliq Hazara, chairman of the Hazara Democratic Party who is running for both the national and provincial assemblies, believes he was the target. He had opened a campaign office nearby shortly before the blast. He said not enough is being done to protect the nine Hazara candidates running for office from Quetta. “The government promised us—police promised us—they would provide us guards. It has been two months and until now I think I have been given only one guard,” he said. “How can I move with only one policeman to areas where there is always the shadow of terror?”

Quetta city police chief Mir Zubair Mahmood said security had been provided to every candidate who had asked for it and that fears of attack were “to some extent” exaggerated. Human Rights Watch says more than 400 Shia were killed in Pakistan in 2012, the worst year on record, and while attacks have declined since the atrocities in Quetta in January and February, the rhetoric of sectarianism continues unabated.

In the Punjabi city of Jhang, birthplace of Lashkar-e-Jhangvi, a cleric running for Parliament from a party linked to the militant group said he wanted to win so he could carry what he called his “anti-Shia mission” to the world. His Ahle Sunnat Wal Jamaat movement is fielding scores of candidates for national and provincial assembly seats, and while they have little chance of winning, their presence is a stark reminder of intolerance.

Among Quetta’s Hazara, though, there is a determination to brave the threats and make their voices heard through the ballot box. Flags and posters of Hazara candidates dot the dusty, low-rise city. In Hazara Town, on the very spot outside a snooker hall where a car bomb in January killed 92 people, a witness to the attack said he owed it to the victims to vote. “A lot of my relatives died here and I will cast my vote because we need change and it is my responsibility—we are Pakistani and I will vote for Pakistan,” he said.

Provincial assembly candidate Haji Imran Ali of the religious Majlis Wahdat Muslimeen party said the protests the Hazara staged after the bombings, which brought down the provincial chief minister, had given them confidence. “Of course, tension is there, but the two long sit-ins of the Hazara community … brought confidence among the Hazara community that if they can bring down an incompetent government, they can change everything,” he said.