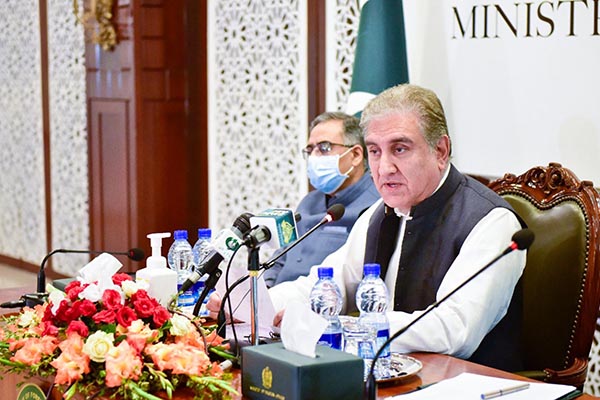 “Yesterday’s (Thursday) meeting achieved nothing. In my view it was a drama that can at the best be called as a public relations exercise that yielded nothing,” he told a press conference in Islamabad of the meeting between Modi and 14 political leaders of Jammu and Kashmir during which they were told that elections would be conducted in the disputed region after delimitation. The anti-India All Parties Hurriyat Conference was also not invited to the meeting, which was the first interaction between Delhi and Kashmiri leadership since the unilateral abrogation of the special constitutional status of Jammu and Kashmir.

Deriding the “handpicked politicians” that had been summoned to Delhi, Qureshi said that even they had called for restoration of political rights, release of political prisoners, end to extrajudicial killings and reversal of illegal and unilateral step of annexation. Kashmiris, he said, wanted security, protection of their just rights, and an end to attempts to alter the demographic structure of the region.

Stressing that Modi’s decision to summon the all-parties conference had “exposed” tall claims about a “normal” situation in Jammu and Kashmir, he said there remained a wide gulf between the aspirations of the Bhartiya Janata Party-led government, and the true representative of Kashmiris who remained “in search of their identity and the basic right of self-determination.”

Qureshi alleged the past two years had witnessed a “siege of the Kashmiri people” with routine incidents of extrajudicial killings, illegal detentions and abductions. “India has exercised all tools of State oppression to curb the determination of Kashmiris, however it has failed to subjugate them,” he said, adding that the abrogation of Article 370 and the subsequent lockdowns had resulted in 50 percent of all industries in the valley being shut down.

To a question on whether Pakistan and India were holding backdoor communications to advance their bilateral relations, he categorically dismissed the notion. However, he added, there remained “time to time interaction at intelligence level in the area of regional security.”