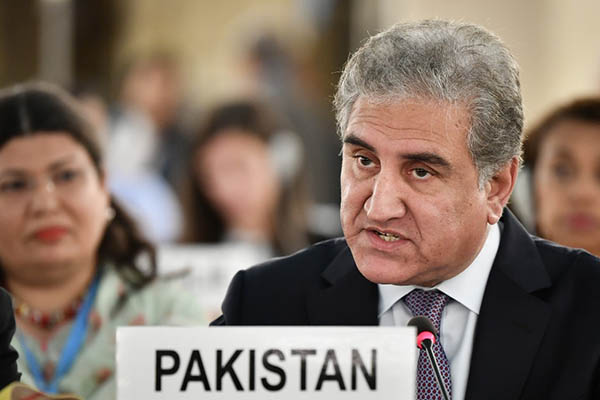 Foreign Minister Shah Mehmood Qureshi, in an interview with Afghan broadcaster ToloNews that aired on Saturday, refused to comment on whether or he believed Al Qaeda founder Osama bin Laden was a “martyr,” claiming he will let the question “pass.”

“Prime Minister Imran Khan called Osama bin Laden a martyr [on the floor of the National Assembly],” said journalist Lotfullah Najafizada at one point during the interview. “Well, again, out of context. Out of context,” responded Qureshi. “He [P.M. Imran Khan] was quoted out of context. And, you know, a particular section of the media played it up,” he added.

“Is he a martyr? You disagree? Osama bin Laden?” Najafizada followed up, urging the foreign minister to clarify his own views on the situation. “I will let that pass,” responded Qureshi, after a lengthy pause.

Last year, during an address in the National Assembly, the prime minister had discussed the assassination of bin Laden in Abbottabad. In it, he paused after saying “Osama bin Laden,” correcting himself and declaring “Osama bin Laden shaheed (martyr).” This was the sum total of the context offered, which the foreign minister appears to believe was “played up” by media. In his speech, the prime minister spent more time lamenting the “embarrassment” caused to overseas Pakistanis by the discovery of bin Laden in Pakistan than any regret or criticism over how he was able to live in the country for several years without any hindrance.

In his interview, the foreign minister dithered on whether or not an Islamic emirate would be acceptable to Pakistan. “We have never said, we have never supported or advocated a takeover of Kabul by force … See, what I have said is it is for you, the people of Afghanistan, to decide what you want,” he said, adding that Pakistan wanted an independent, sovereign, prosperous and democratic Afghanistan.

To a question on whether Islamabad feared the outbreak of civil war in Afghanistan following an ongoing U.S. withdrawal, he said: “I hope not. Please, that’s why I’m saying, please sit together and carve out a way forward, you know, which is coexistence, reconciliation. Accept each other. You have to accept each other. You know, the people and government in Afghanistan and the Taliban that have been fighting for decades now, they’re both Afghans. You have to reconcile, and you have to find a way forward. We’re concerned because God forbid, if there is civil war…. It depends on you, depends on the Afghan leadership, depends on the ability of the Afghan leadership to carve a way forward. If you fail, if the Afghan leadership fail, then yes, we are heading for a civil war. And God forbid, if there is one, then you suffer and we suffer as well.”

Hoping that the stalemate between Kabul and the Taliban over peace talks would soon end, Qureshi warned that if it continued beyond the complete withdrawal of U.S. forces, Afghanistan could be sucked back into a 90s spiral that would hurt the entire region. “Can Afghanistan afford another civil war? Can you afford another decade of anarchy? You cannot, and you should not. You know, I feel for the people of Afghanistan. They have suffered enough,” he said, reiterating that Pakistan had suffered second only to Afghanistan as a result of the war on terror.

To a question on former prime minister Yousaf Raza Gillani telling Parliament that there was a “state within a state” that hampered the functioning of Pakistan’s civilian government, Qureshi claimed it was made out of “perhaps political considerations” and reiterated the PTI’s claims of “all institutions” working on the “same page.” He also said Islamabad was ready to offer training for Afghan security forces in Pakistan.

To another question on whether or not the U.S. had been defeated by the Taliban, the foreign minister said that Americans believed they had “achieved their objective” of protecting mainland United States from terrorists. “They feel in these 20 years, they have succeeded in the objective that they had set forth and it’s time to go back home, and they feel that the Afghan government and the Taliban that they negotiated a peace agreement in Doha have very openly agreed that Afghan soil will not be used against the U.S. or any other country,” he said.

Qureshi, responding to a series of questions on whether or not the Taliban were responsible for the surge in violence in recent months, appeared to suggest such claims were being “exaggerated” and did not reflect ground realities. “The Afghan National Army and the Afghan security forces have to deal with that situation. The international community has spent a lot of money in equipping and training the Afghan security forces, right? And you are far exceeding in numbers compared to the Taliban. That’s the perception one has. So, why don’t you do your soul-searching what is going wrong?” he said.

When the interviewer pushed the foreign minister to explain whether or not this reflected that the Taliban wanted peace, Qureshi claimed he believed they did. “I feel they also realize that they have suffered and there have paid a huge price. And it’s their country. They are not foreigners,” he said. “If you try and create this impression that the violence is high because of Taliban, again, that would be an exaggeration. Why do I say that? Aren’t there other elements over there who are playing the role of a spoiler?” he said, as the interviewer pushed him to explain who these spoilers were.

“Daesh. Like forces within Afghanistan,” said Qureshi, claiming people who wanted to “hang on to power” were acting as spoilers. “President [Ashraf] Ghani is in power. Are you implying that he doesn’t want peace?” questioned Najafizada. “I think President Ghani has a very important responsibility on his shoulders that he has to show the leadership and the flexibility to achieve … a peace deal,” he said, claiming there can’t be peace if Ghani and his team do not back down from “their position.”

In one exchange, the foreign minister appeared to dismiss Afghan concerns of Pakistan supporting the Taliban, repeatedly urging the interviewer to stop being “stuck in the past” and look to the future.

When the interviewer quoted the late Gen (retd.) Hamid Gul as claiming the ISI had defeated America in Afghanistan “with the help of America,” Qureshi said he could not comment on the statement without knowing the full context—though he had no similar compunctions about commenting on Gilani’s speech. He also rejected, again, the perception of Pakistan giving military bases to the U.S. for operations against Afghanistan, claiming Islamabad only wanted to pursue peace. “We’re willing to help in Afghanistan’s reconstruction, rehabilitation. We’re willing to partner with Afghanistan, with the U.S., on countering terrorism. Yes, we will be partners for peace,” he added.