Qureshi Thanks Iran President for Support to Border Market Initiative 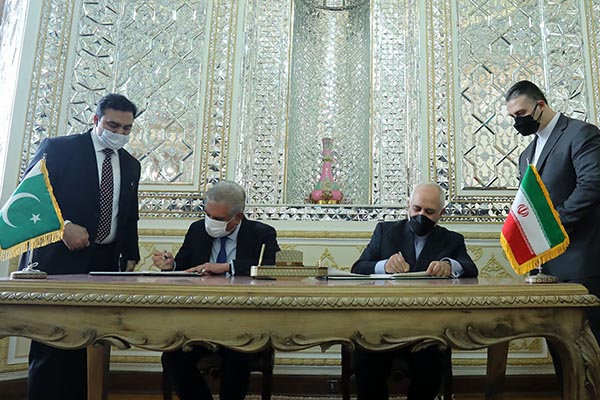 During a three-day official visit to Tehran, Qureshi signed a Memorandum of Understanding with Iranian counterpart Javad Zarif to establish bazaars in the border areas between Pakistan and Iran with an aim to bolster economic ties between the two states. Under the MoU, both countries have agreed to establish joint border markets along their common border. In the first phase, three bazaars would set up at border points of Kuhak-Chadgi, Rimdan-Gabd and Pishin-Mand.

In the second phase, joint border bazaars would be established in three other border points. The markets would be managed by methods agreed upon by the two countries.

Meeting with the president

In an earlier meeting with Rouhani, Qureshi discussed various means to strengthen bilateral ties between their two states, noting their shared history, culture, faith and language. He stressed Prime Minister Imran Khan’s vision to strengthen ties with Iran in diverse fields, with an emphasis on expanding mutually beneficial economic cooperation and development.

The foreign minister also thanked the Iranian leaders for his state’s consistent support to the Kashmiri people, and discussed rising Islamophobia in the west, appreciating the convergence between Pakistan and Iran against xenophobia, intolerance and incitement to violence on the basis of religion or belief.

According to statement issued by the Iranian presidency, Rouhani said security was a shared concern of the two countries, adding that it could be tackled through greater cooperation. He also addressed the regional scenario, noting that peace and stability could be ensured through regional mechanisms. He said Tehran was open to working with Islamabad and Kabul for peace in Afghanistan. “Iran and Pakistan, as two most important and effective neighboring countries of Afghanistan, should increase cooperation and interaction for the development of the peace process in the country,” he added.

Referring to the U.S.’ decision to withdraw all troops from Afghanistan by Sept. 11, Rouhani said Washington’s military presence in the region had not helped maintain security and stability. He also emphasized implementing all agreements between Pakistan and Iran, in a likely reference to stalled accords such as the Iran-Pakistan gas pipeline agreement.

Qureshi also called on Iranian Parliament Speaker Bagher Ghalibaf and emphasized the need for frequent parliamentary exchanges to develop common understanding on various issues. He also called for enhancing coordination at international parliamentary forums. The foreign minister updated the speaker on the human rights violations in India-held Kashmir, and appreciated Iran’s support for the Kashmiri people.