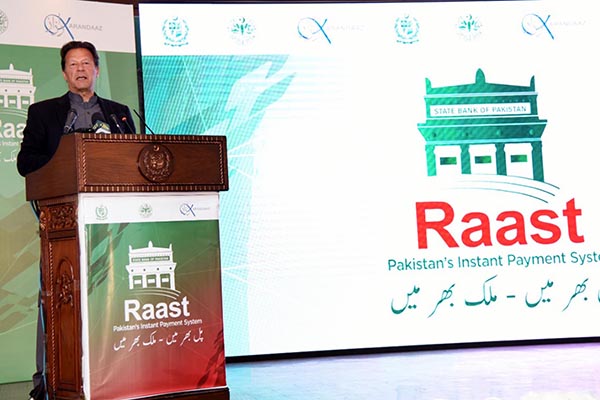 Prime Minister Imran Khan on Monday inaugurated Pakistan’s first instant digital payment system, Raast, and hailed it as a means to tapping the “true potential” of the country’s 220 million citizens.

In an address delivered at the launch ceremony in Islamabad, he said Pakistan’s cash economy was the “biggest hurdle” to the country’s tax collection. “Pakistan is among the lowest tax collectors in the world,” he said, adding that out of 220 million people, only around two million were taxpayers. He reiterated that this low collection resulted in a lack of funds that meant the government could not build new infrastructure, invest in human development, or improve existing facilities.

“A country which 50 years back was advancing the fastest in the region, cannot [develop] because we do not have enough money,” he claimed, and hailed Raast as a means to “slowly” wean the people off the cash economy. This would also help achieve a truly Digital Pakistan, he said, adding the system would boost the inclusion of people from downtrodden segments of society, who were already being aided through the Ehsaas initiative.

“Our effort is that we bring financial inclusion to women, give them opportunities, open bank accounts for them, help them, give them livestock so they can themselves [improve] standard of living and it becomes a source of livelihood for them,” he said, claiming the Raast program would help with this.

“Never before have remittances increased like this,” the prime minister said, congratulating the State Bank of Pakistan for engaging overseas Pakistanis. “It is a big achievement of the SBP that our overseas Pakistanis who sent money through non-formal channels are now trying to send through formal channels,” he said, reiterating that this helped boost the country’s current account and reduced pressure on the rupee.

“As soon as the current account is in deficit, and fewer dollars come into the country while more go out, there is pressure on the rupee and as the rupee depreciates, the whole society is affected,” he reiterated, and noted that Raast would also help boost the formal economy.

During his speech, Khan thanked Queen Maxima of the Netherlands for “taking so much interest in Pakistan, in the wellbeing especially of women living in deprived areas,” and for wanting to increase financial inclusion and taking an interest in the Ehsaas program. He also thanked the Bill and Melinda Gates Foundation for its help to Pakistan, especially in the polio eradication program, as well as the British High Commission and the World Bank.

Earlier, SBP Governor Reza Baqir said between 500 and 1,000 accounts were being opened in the country every day and so far $280 billion had been sent into these accounts. “More importantly our remittances from overseas Pakistanis are at record-breaking levels. There have been about $2 billion [in remittances] every month since the beginning of this fiscal year,” he said, adding the country had also witnessed a surge in the use of digital and online channels to make payments.

“I want to assure you Mr. Prime Minister, ladies and gentlemen, that the SBP will continue to innovate. It will continue to embrace opportunity to bring digitalization to our country and to bring the financial system to those who are not in it,” he vowed.