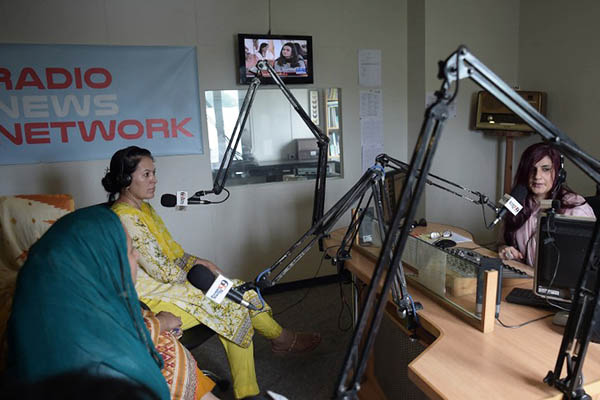 For many women in Pakistan, the simple act of leaving the house can be uncomfortable, even intimidating—the probing gaze of the opposite sex is never far away.

Fed-up with the constant unwanted attention, broadcaster Anila Ansari decided to bring the touchy subjects of harassment to the airwaves, by launching an “anti-ogling campaign” on her national radio show. The idea—unprecedented in the Muslim country where misogyny is often legitimized by hardline clerics—came to her at the start of the year when she returned to her country after living for two decades in Great Britain.

Everywhere she went in public spaces, she felt endlessly intimidated by the male gaze—and found she was far from alone. “I went to different offices, restaurants: everywhere I went I could see these eyes following me,” she told AFP from the Radio99 office located in the center of Islamabad. “So I came to my office and started asking my female colleagues and said ‘Is it just me or do you experience that as well?’ and every woman I spoke with said ‘Oh don’t even talk about it, it’s so endemic.’”

When it came to the men, though, many didn’t even realize there was a problem. “They either laugh it off or they get really upset or even annoyed,” she explained, adding that some even blamed women for encouraging such attention by their choice of outfit or make-up.

Ansari says she launched the campaign to highlight “how it impacts on a woman’s mental health and well being and even her opportunities, academic or employment opportunities.” And her radio station, which claims a listenership of up to 25 million across the country, backed the idea.

As part of the campaign, she hosts regular debates on the subject encouraging listeners to call in. She also makes proclamations to underline her point such as: “You wouldn’t like it if someone was staring at your sister!”

Najib Ahmed, the radio’s director, said the project had his full support from the outset. “In our country we put these kind of issues under the carpet, we don’t discuss them,” he said. “It is the basis of everything, the basis of the economy, the women go out of their home and if [women] are not comfortable they won’t be able to do their jobs properly with their other colleagues.”

One afternoon in September, Anila and her colleagues gathered on the pavement outside Radio99’s headquarters to spread their message on the streets. Journalists handed out leaflets and made speeches. “Say no to staring. It’s unethical!” shouted one of the DJs.

Sana Jaffry, a young woman wearing a pink hijab and sunglasses, said the project had her support, adding she too suffers from daily ogling by men on her way to work. “These men who keep their sisters locked up at home, why do they stare at others?” she said. “They need to appreciate that women who go out are also respectable.”

Radio99’s campaign is a “first step” she says. But, to truly change things, “the matter will have to be taken up by the government.”

Nearby, Ayyan Ali, a young man dressed in traditional garb, is far from convinced. Girls, he says “are the honor of their parents.” If they don’t wear the burqa or clothes that completely cover the body, “they can’t complain if someone is staring at them.”

“If they go out in the street in inappropriate clothes, we can’t help ourselves,” he adds. According to Ali, most men share his views. “Nobody has come out for this campaign,” he said. “Everyone is watching the journalists from head to toe. Nobody is looking at them with good intentions because they are not covered properly.”

Women in Pakistan face huge discrimination in all aspects of their lives, with the country ranking 144 out of 145 on the World Economic Forum’s 2015 Gender Gap report. Ansari hopes her show can open the door for discussions on other issues facing women and girls such as honor killing, forced marriages, and child brides.

For lawyer and feminist Rafia Zakaria, the issue of harassment brings to the fore the place of women in a profoundly patriarchal society. Staring is an act of intimidation aimed at “pushing women out of the public sphere,” she said, adding that the aim has been validated by the clergy. “They believe wrongly that it is required by Islam,” Zakaria said.

She urged women to take out their phones and record evidence to shame men who ogle and harass. Zakaria explained: “When this form of harassment is made visible and is debated, moral pressure is created to stop it.”