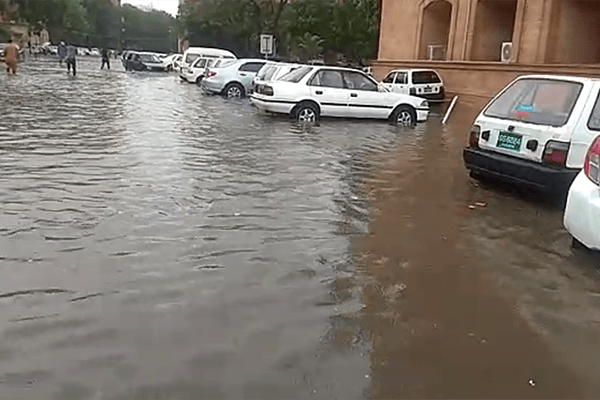 The Sindh government on Tuesday declared a “rain emergency” in the province after record monsoon rainfall swept over various cities, resulting in flooding, power outages and forced evacuations.

In a posting on Twitter, provincial spokesperson Murtaza Wahab announced that Chief Minister Murad Ali Shah had imposed a “rain emergency” in the province. “I have imposed rain emergency, we’re with the people in this challenging time,” a spokesperson for the chief minister quoted him as saying, adding that he would not leave the people alone “in this time of need.”

The record rainfall, with around over 300mm being recorded in Karachi already, has exacerbated the situation in the provincial capital, which has been dealing with blocked waterways and low-lying areas being completely inundated. Residents of the city have also complained of prolonged power outages.

On Tuesday, the chief minister visited Shahrah-e-Faisal, the Karachi Airport, and Malir and personally monitored recovery efforts. On Wednesday, he commenced a tour of various parts of the province, including Thatta, Badin, Hyderabad and Sujawal to monitor the prevailing situation and direct efforts to drain water from flooded regions.

According to the ISPR, Army chief Gen. Qamar Javed Bajwa has directed the Karachi Corps to step up flood relief operations to assist affected people due to recent rains in interior Sindh and Karachi. “Troops must reach out to affected population in distress and extend all necessary care,” the armed forces’ media wing quoted the Chief of Army Staff as saying.

“Besides rainfall in Karachi, downpour also occurred in Kirther Ranges, which lead to overflow of Lath and Thado Dam,” a statement issued by the ISPR added. “Overflow from Lath Dam struck Northern Bypass and also caused severe flooding in Malir Nadi bank resulting water flow towards Quaidabad,” it said, noting that around 20 areas of Karachi had been “badly affected.”

According to local media, scores of families have been displaced in Badin, while affected families in Tharparkar are being relocated to safer places.