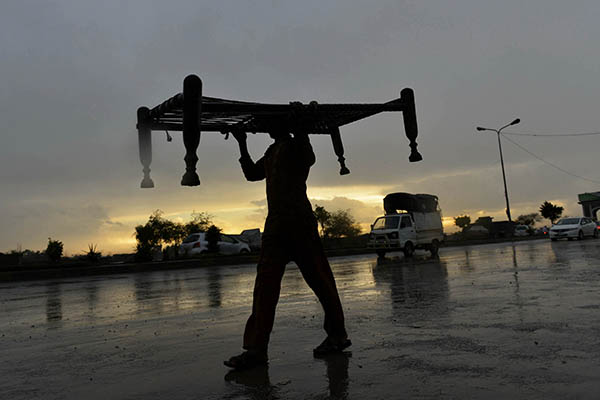 Torrential downpour caused electrical shorts and roof collapses, injuring another 24 across the province.

At least 25 people were killed, including five women and an infant, and another two two-dozen injured after heavy rain and thunderstorms struck various parts of Punjab province on Wednesday night.

“Twelve of the 25 casualties occurred in Lahore due to various incidents of roof collapse,” said Mohammad Usman, the district coordination officer of Lahore. The senior administrator said that six people, including a baby girl, died when the roof of their house collapse in the Chah Miran area of the provincial capital. “Similar incidents were reported from Mozang, where two people were killed, and Johar Town, where a child died and eight others were injured,” he added.

According to Usman, the wounded have been shifted to hospitals for immediate treatment. “I am personally monitoring the rescue operations to ensure no one is left unaided in this hour of need,” he added.

Jamshed Sayyal, one of the rescue officials, said the torrential rain—around 170 mm of rainfall have been recorded in Lahore alone in the past 24 hours—had also struck the provincial capital’s surrounding areas. At least four people, including two children, died after a roof collapsed on them in Sialkot, while another two died and 10 others were injured after their house’s walls became electrified due to an electrical short in Okara.

Sayyal said two more people were killed after a roof collapsed in Kasur district, while a girl was killed in Daska after she was electrocuted.

Punjab Chief Minister Shahbaz Sharif has announced Rs. 500,000 for families of people killed due to the rainfall, while Rs. 100,000 will given as compensation to the injured.