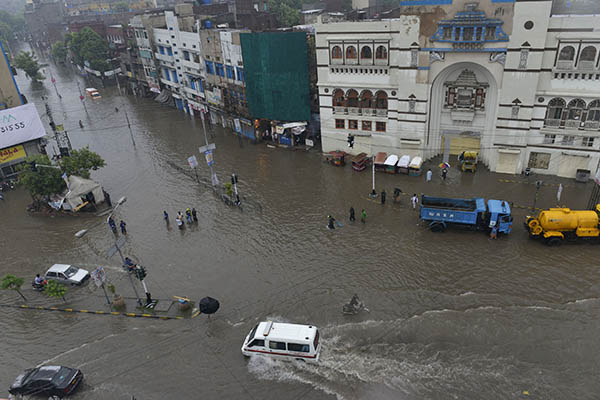 More rainfall expected, as casualties rise due to roof collapses and electrocution.

The deaths have all come in Punjab province and in Pakistan-administered Kashmir, with most caused by roof collapses and electric shocks. Pakistan has suffered deadly monsoon floods for the last four years—in 2013, 178 people were killed and around 1.5 million affected by flooding around the country.

The National Disaster Management Authority (NDMA) warned there was a high risk of flooding in three towns along the Chenab river in Punjab and asked people to leave low-lying and vulnerable areas. Troops have been mobilized for flood relief duties in eastern Punjab and “will remain on standby in Lahore.”

Dramatic images from Lahore, Pakistan’s second-largest city, on Thursday showed some major streets flooded. “At least 35 people have died and 108 been injured in Punjab, 18 of them died and 53 injured in Lahore,” Rizwan Naseer, the director general of rescue services in Punjab, said. “Most of the deaths occurred due to roof collapses and electric shocks in the last 48 hours.”

Naseer warned that the death toll was likely to rise as reports were coming in of floodwaters sweeping through villages in rural areas.

Also in mountainous Kashmir, three soldiers died on Thursday in a mudslide near the de facto border with India.

There were desperate scenes in Rawalpindi, where rescuers struggled to free a man buried up to his face in mud that had engulfed his family’s house. “My house collapsed in the landslide due to the heavy rain. My whole family was trapped under the debris,” said the man’s father Azeem Khan, shortly before his son was freed. “I have nowhere to live.”

Pakistan’s meteorological office issued a severe weather warning for northeast Punjab and Kashmir, saying more intense rain was expected which could trigger flash flooding. The NDMA said that the town of Palandri in Kashmir had received more than 30 centimeters of rain in the 30 hours up to 2:00 p.m. on Thursday.