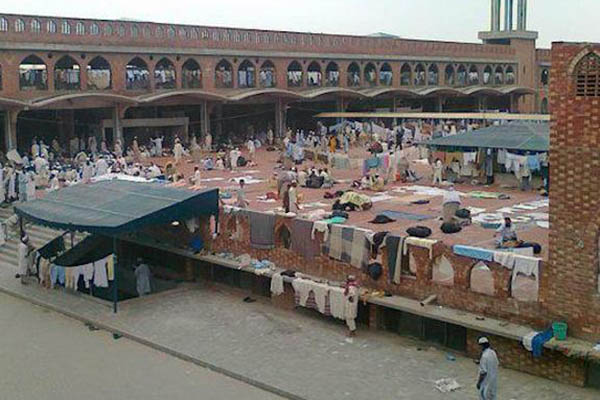 Police in Punjab on Tuesday placed the entire city of Raiwind under quarantine, shutting down all general and medical stores, as their counterparts in Sindh were also ordered to quarantine any members of the Tablighi jamaat found in the province.

The decision was taken after 27 of 50 suspected cases of coronavirus among members of the Tablighi Jamaat tested positive for the disease. The patients have since been transferred to quarantine facilities at Kala Shah Kaku and Kasur.

Last month, around 250,000 people from across the world gathered in camps at Raiwind for the annual, five-day Tablighi Jamaat congregation. The gathering occurred after Pakistan had already reported its first cases of coronavirus and organizers ignored pleas from the government to cancel or postpone it due to fears about the deadly disease spreading. The event was cancelled after just a day, but while most people immediately left for home, “tens of thousands” were reported to have opted to stay in place.

On Tuesday, Punjab authorities said over 2,200 members of the Tablighi Jamaat were still in Raiwind. A team of medical professionals has commenced testing for all of them to determine if the infection has spread among the congregants.

After the 27 cases tested positive, Sindh Inspector-General of Police Mushtaq Mahar ordered police to immediately quarantine any members of the Tablighi Jamaat that were found in the province. He said police should collect information about the Tablighi centers and how many had traveled to Raiwind for the annual gathering. Police should also ensure that anyone placed under quarantine is provided food rations and is kept in isolation, he added.

The top cop said that contacts of all those who lived outside the Tablighi centers must be traced to ensure the virus did not spread to other people.

On March 29, two people who had returned to Karachi from Raiwind had died of the coronavirus, according to the Sindh Health Department. A day later, a 30-year-old Chinese man from Hyderabad who is a member of the Tablighi Jamaat also tested positive for the virus, raising fears that it was spreading among people who had attended the Raiwind gathering.

Following the COVID-19 testing result, around 550 members of the Tableeghi Jamaat, including 26 foreigners, were quarantined at mosques in Sukkur and Hyderabad.

Pakistan currently has 2,071 confirmed cases of the coronavirus, with 27 deaths and 82 full recoveries. Most of the country is currently in the midst of partial lockdowns to encourage social distancing and curb the spread of the disease.