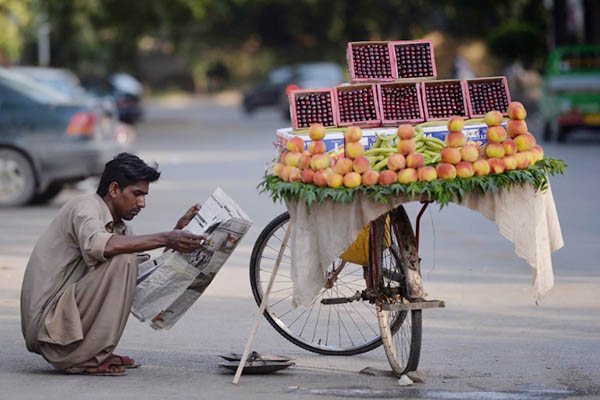 Pakistan’s media joined the country’s lower-middle class this week and urged Ramzan shoppers complaining of price hikes to stop buying fruit from roadside vendors for three days. Every year during Ramzan, prices of perishables go through the ceiling to wails of consumers on TV over being victimized by the enemies of the holy month. To be fair, the boycott was a better way of tackling the price-hike than keening about the desecration of Ramzan by those who rip off hungry fellow-Muslims. You cut consumption and prices come down. That’s basic economics.

This was also better than appointing special magistrates who would go out and punish shopkeepers for profiteering. However, the whole campaign was centered on the “poor man” fasting with little pre-fast sustenance and few affordable options for breaking his fast due to high prices of fruit and vegetables. Reports trickled in that some fruit-sellers were indeed forced to get rid of their perishable stock at low prices. Not much attention was paid to their complaint that the middlemen at the mandi (wholesale market) were indulging in extortion in a high-demand market. Of course no one thought of the poor fruit-seller who looks forward to Ramzan every year to make some extra money from the habit of overeating in a month of austerity.

Overall though, there was little change in prices due to the boycott. This happened because the fruit-sellers are mostly poor people and have no cushion to soften the blow of boycotts. However, the posh restaurants made their pile as usual from the gormandizing elite used to putting on weight during Ramzan. Inevitably, the result was that two classes—the lower middle class consumer and the poor fruit-seller—were forced into a battle that hurt only each other even as prosperous upper class continued to “enjoy” the month of Ramzan as usual.