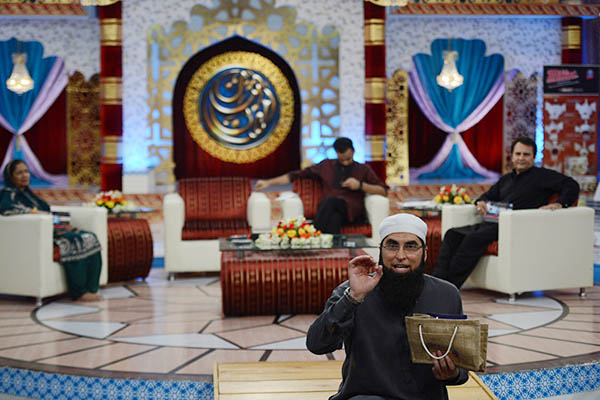 In the battle for TV ratings, Pakistan’s top channels are making money out of Ramzan by broadcasting round-the-clock chat shows mixing prizes, charity and prayer.

As the top-rated show fends off allegations of poor ethics for giving babies to childless couples live on air, producers say that there is nothing wrong with blending religion and entertainment.

With a closely cropped beard, spectacles and smile plastered permanently to his face, Hussain is no stranger to controversy. But while he is unable to substantiate his alleged degree in Islamic studies from Spain, he revels in his status.

“It is not commercialization, it is not showbiz. It is real Islam,” he says. “I am the religious icon of television.”

Sumaya, an 18-year-old student queuing up to get a pass onto the show, is a massive fan. “According to me he is the most popular because of the gifts and also because they are helping poor people, and people for Iftar and what they are saying about Islam,” she said.

On his TV set, a wedding hall at a Karachi hotel, adverts for ketchup vie for space with pictures of camels grazing in the shade of artificial palm trees.

Hussain croons into the microphone about the virtues of fasting, of inter-faith tolerance and recites the Quran.

He plays with children, oversees the cooking of chicken masala and invites Sufi singers to perform religious songs, whipping the viewers into frenzy.

The show lulls its guests, getting ever hungrier, toward sundown and the breaking of the fast when plates of dates, battered vegetables and sugary delicacies are handed out to much relief.

After dinner, there are quizzes—with mobile phones, a motorbike and even a car as prizes.

Last month, two infertile couples, whose request to adopt had just been approved by a charity, were called into the studio to be handed a baby live on television before millions of viewers. “It was our dream to have a child,” said Tanzeem, new mother to Fatima, barely a month old with blue eyes.

Hussain and the charity claim to want to break taboos about adoption, encourage women not to abandon unwanted children and men not to divorce wives who can’t have babies.

The giveaways were criticized in the Western media, but in Pakistan, a country with millions of desperately deprived children in need of good homes, others defended them as social work.

Television channel Geo and the charity insisted both couples were fully vetted prior to the show after already signaling their desire to adopt.

Instead there has been as much concern about fears that Islam is being commercialized in a crude TV ratings war with the 30 days of Ramzan raking in even more revenue than cricket.

“Aamir Liaquat Hussain’s show is the biggest success in the history of Pakistani TV,” said one Geo executive. “It’s a race,” hit back a producer at rival channel, ARY. “Big money is involved,” he said. “We talk about millions of rupees per month for a star.”

ARY’s answer to Hussain is Junaid Jamshed, a rock star from the 1990s who says he turned his back on money and partying to become a preacher after the 9/11 attacks which he felt demonized Islam.

ARY cuts a more conservative image. Guests remove their shoes before coming on set, as if in a mosque. During advertisement breaks, Jamshed turns towards Mecca to pray in a corner of the studio.

But the set also has cookers, motorbikes and mobile phone ads. Prize draws recite verses from the Quran, calling for public donations to help the sick and disadvantaged.

Jamshed compares the rise of TV preachers in Pakistan as a catch-up to Christmas programming in the West and defends the mix of religion and entertainment.

“This is what Islam is. The essence of every religion is to make people happy and … to help people,” he said.

Producers say that the segments of shows where gifts are given away have “phenomenal ratings.”

Jamshed’s co-host, Waseem Badami, sees nothing wrong in a ratings war but says decency still needs to be upheld. “If all the TV channels are doing Ramzan transmissions, yes their prime objective is commercial. Why should we lie about this?”

“We are trying to maintain both that we want to be in the race but at the same time … this is a very sacred platform.”

Whether you agree with this or not – its an interesting subject matter to debate on!! 🙂

In a society where selling religion is no longer consider shameful…… Allah hi hafiz hai .. perhaps if Mullana Hali would have been alive he would have consider this breed of Muslims to be much more corrupt then the ones he wrote his poem for long time ago….
This is a show which depicts the death of a society which is dying intellectually… no Galib, no Faiz, no faraz is amongst us, No more Moin Akhtar no more Anwar Maqsood’s class comedy, no more Bajia’s plays….. What we do have are these self-proclaimed religious scholars whose authenticity is dubious in YouTube videos… but perhaps we deserve these rip off… perhaps we deserve them because we have lost all shame… for just another Q-mobile or firdous ki lawn……. sad… sad…. I never thought Islam was so cheap…

The way I see it is a) TV attracts people in Ramzan and having worked as the marketing head of a TV channel I can tell you that ratings and money soars during Ramzan. That is not going to change. b) There is nothing wrong with creative Ramzan programming, sure its grand but as long as its not in-decent its ok c) I personally dont think of Amir Liaquat as my ideal religious figure but he sure is a show man and giving away babies to childless couples is nothing bad. Its great! and yes it adds to the sensation and the ratings d) Ramzan is a month of reflection and prayer but culturally it is also exciting, traditional and much celebrated. What I dont agree with however is wastage of money, because Allah dislikes that and forbids that in the Quran, elaborate sets, too much money spent on useless things, that is not good, there has to be a limit there. In conclusion yes it is glamorized and commercialized but then that is what TV is all about. After news journalism ends what do you expect from programming? Ofcourse they are going to take Ramazan and make it a show everyone can enjoy! The spirit of giving….

Liaqat makes me sick to the bone! He doesn’t care if he makes a fool of himself or others as long as the show’s ratings are increased. Watch this: http://www.youtube.com/watch?v=SFj1HRfFkck This guy is sick.

We always content ourselves with grumbling and cursing. Perhaps its time we do something practical and possibly effective to get rid of charlatans like Amir Liaqat. Please sign the petition on the above link.

I dont know…..I hate him, definately hate charlatrans. But I am extremely amused by him too. His audacity knows no bounds! BUT while having fun he seems to not cross any lines! Ok lets account what he’s done wrong at the end of the day a) He made some jokes about the eye to eye guy’s hair and hugged him b) He tried to wrap a boa constrictor around him 😀 (hahahaha its a messed up sense of humor but its better than a fuddy-duddy maulana) c) He gave away free babies to childless couples (Alhamdolillah. Kissee ke goud bhari). I know a lot of peoples reactions are based on his previous off camera videos. OFCOURSE he is a “Jalee Mullah”. But hey…..other than his Mr. Hyde side he does have a good religous knowledge base as his Dr. Jekyll side! Now for me I dont see him for any religious reasons, I just like to watch him and laugh, because beneath all that sobre demeanor and good-boy preacher voice I know what sort of “Chichora” is lurking. Dont ban him and take that way from me please. He is the only decent comedy left on national television.

And by the way. Comedy aside. Good petition. I’ve signed it.