Home Lightbox Rangers and the Writ

Rangers and the Writ 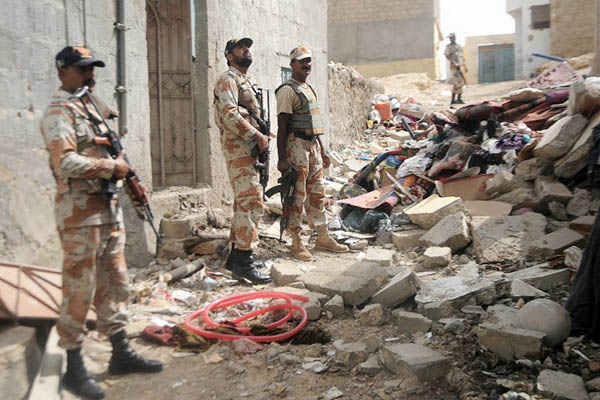 The real existential problem is the state’s loss of writ.

The Pakistan Rangers (Sindh) have been allowed another three-month remit in Karachi, but are still not allowed to exercise the same authority in interior Sindh. The Sindh government of the Pakistan Peoples Party has reservations about how the Rangers tackle their mission against terrorism while admitting that they have brought urban terror down significantly. The Rangers want full powers in interior Sindh, and the federal government supports them.

Pakistan’s real existential problem is the state’s loss of writ. It is absent or weak in about 60 percent of its territory. The weak areas include most of Balochistan, most of the federally and provincially administered tribal areas, parts of the settled areas of Khyber-Pakhtunkhwa, swaths of interior Sindh controlled by big landlords sitting in Karachi, and South Punjab abutting on Sindh in the south. The state’s authority has in part been replaced by madrassah power interfacing with the Taliban, Al Qaeda, and the Islamic State.

In March this year, Sindh accepted that 53 madrassahs in interior Sindh had terror links. A year earlier, the number was 49. The problem is steadily getting worse as state-owned primary schools have mostly turned out to be ghost schools or run by absentee teachers who are not qualified to teach. There are in fact 12,000 madrassahs in Sindh and the government has little idea of what goes on there.

One reason that Pakistan can’t wake up from its slumber over terror is its reluctance to reclaim its writ over areas lost to non-state actors who gain legitimacy through partaking of the sovereignty of the state through fatwas. Alas, the civilian executive and its instruments, such as the police, are ideologically inclined to favor this reduction of state-control over territory.