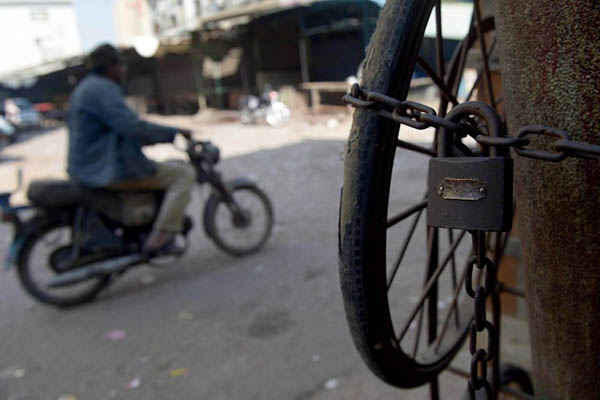 The Muttahida Qaumi Movement called on Wednesday for a day of “peaceful mourning” after Rangers personnel conducted a raid of the party’s Nine-Zero headquarters, confiscating a large supply of arms and ammunition and placing several party activists under arrest.

“After receiving trustworthy intelligence, we conducted a raid on the headquarters of the MQM at 5 a.m. on Wednesday morning,” Col. Tahir, a spokesman for Sindh Rangers, told media. “The operation lasted two hours and we recovered a large cache of stolen NATO weapons and other foreign manufactured weapons, including Kalashnikovs, bullets, and bulletproof jackets,” he added.

The spokesman claimed six “wanted” criminals, including one involved in the 2011 murder of journalist Wali Khan Babar, had been arrested during the search operation. He said 12 other suspects had also been arrested, while MQM leader Amir Khan had been detained for questioning. “Amir Khan has not been placed under arrest,” said the spokesman, “he will be allowed to leave once routine questioning has been completed.”

Col. Tahir said Rangers had sealed MQM headquarters until a full search had been completed, adding that they had also removed barriers on the road leading to Nine-Zero.

Reacting to the raid and subsequent arrests, the MQM announced a nationwide protest, and urged transporters and traders to shut down operations for “peaceful mourning.” Fearing violence, all private schools in Karachi, Nawabshah and Sukkur have shut down. Several shops were also shuttered after party workers started protesting in the streets.

Faisal Sabzwari, a MQM member of the Sindh Assembly, told journalists the party had a valid license for every weapon confiscated by the Rangers—an assertion denied by the Rangers spokesman, who claimed they had seen no documentation. “They [Rangers] opened fire on our workers, killing one, and injuring several others, including a media worker,” said Sabzwari.

MQM chief Altaf Hussain, who lives in self-exile in London, called for calm and condemned the “terrorism” of the security forces. “They [security forces] didn’t even spare my widowed sister and raided her house too,” he claimed. “If anything happens to her, the Rangers would be held responsible.”