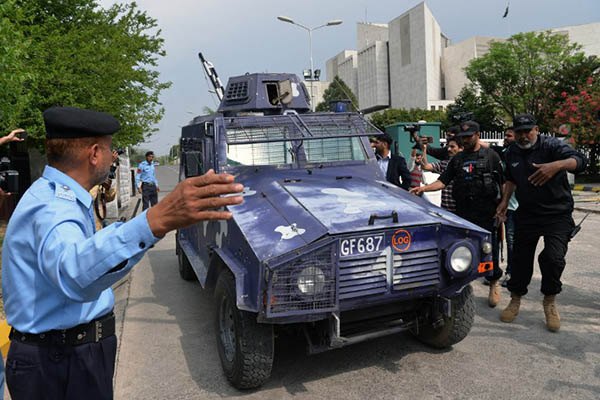 A top Pakistani police officer, who went on the run after the extrajudicial killing of a young social media star prompted angry nationwide protests, appeared at the Supreme Court on Wednesday, prompting questions over his fate.

Rao Anwar, formerly a senior superintendent in the Karachi police force, appeared in the top court in Islamabad, covering his face with a surgical mask.

He was last seen trying to flee the country on Jan. 23 as fury grew over the fatal shooting of 23-year-old Naqeebullah Mehsud, an aspiring model whose goofy dance videos and airbrushed brown locks had earned him a large Facebook following.

“Rao Anwar presented himself through a lawyer in the court… and the court directed that he should be taken into custody,” said Faisal Siddiqui, a lawyer for Mohammad Khan Mehsud, the father of the victim.

The policeman, who rose through the force’s battle-hardened ranks in the 1990s, has been accused of spearheading hundreds of extrajudicial killings including that of Mehsud. His disappearance had fueled speculation and conspiracy theories that he was being aided by the country’s intelligence agencies.

In court on Wednesday he requested protective custody, but the three-member bench headed by Chief Justice Mian Saqib Nasir ordered his arrest.

They also called on police to form a team to investigate Anwar. His name will remain on a no-fly list, though Siddiqui said the court ordered his bank accounts be unfrozen.

Mehsud’s father and dozens of relatives were present at the court, where the chief justice ordered them “not to harm” Anwar or threaten him “directly or indirectly.”

“Now I am hopeful that I will get justice,” Mehsud told AFP.

Karachi, a port city of some 20 million and Pakistan’s economic hub, was frequently hit by Islamist, political and ethnic violence before paramilitary forces began a sweeping crackdown in 2013. But rights groups have accused police and paramilitary troops of carrying out hundreds of extrajudicial killings in staged gunfights, or “encounter killings.”

Mehsud was shot dead along with three other people in what police say was an operation targeting Taliban insurgents on Jan. 3.

Friends and relatives insist the internet celebrity had no connection to militancy, and was a victim of an “encounter.” His killing brought thousands onto the streets to urge an end to impunity. His death was also the catalyst for a growing Pashtun movement in the country.

Thousands of members of the ethnic group from the northwest region near the border with Afghanistan have taken to the streets in recent weeks to protest profiling and treatment by the country’s military.