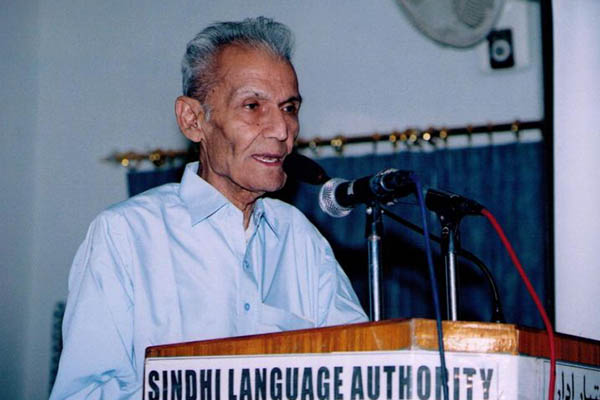 Rasool Bux Palijo, a veteran Sindhi politician and human rights lawyer, died in Karachi on Thursday after a protracted illness. He was 88 years old.

Born on Feb. 21, 1930 in Jung Shahi, Thatta district, he was a graduate of the Sindh Law College and served as a lawyer before the Supreme Court. Influenced by communism, his fought for human rights and equality, with a special focus on Sindh. As part of his efforts, he founded the left-wing Awami Tehreek in 1970, which was a vocal opponent of military operations and rule across Pakistan.

Palijo’s principled opposition to martial law and protests during the tenure of Zulfikar Ali Bhutto’s tenure resulted in several prison sentences, with him spending almost 11 years incarcerated in several stretches. His imprisonment following his opposition to Zia-ul-Haq’s military rule earned him honors from Amnesty International, which declared him a ‘prisoner of conscience.’

The politician and activist was also a prolific author, writing 26 Sindhi-language books including a personal diary that he penned while incarcerated.

“Rasool Bux Palijo will always be remembered for his struggle and sacrifices for democracy,” said Pakistan Peoples Party Chairman Bilawal in a statement. “His literary services will never be forgotten either. We are with his family in this time of grief.”

The deceased’s funeral was held after Friday prayers, with him being laid to rest in his ancestral village of Jung Shahi.